Retrogrades are a time to slow down and trust the guidance of the cosmos. 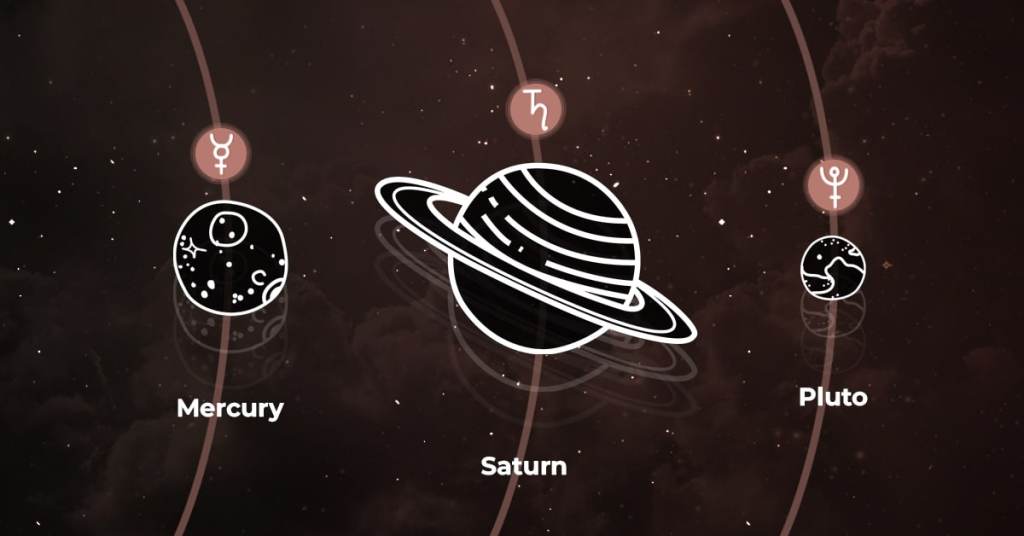 Mercury, Pluto, and Saturn are all retrograde right now. And until they turn direct again in October, it’s essential to take some time to truly understand how each of these planetary energies impacts your life and how you can use that influence to benefit yourself and others. Read on to learn more about what retrogrades mean, how they work, and how you can use them to deepen your understanding of the cosmos and gain insight into your life today.

What can you expect as you begin your journey into Pluto in Capricorn? The most accessible place to start is by understanding how Pluto’s last transit through Capricorn affected you and how that may help guide your actions during its current retrograde. During Pluto’s last transit through Capricorn, some key things that happened were major economic crashes (remember 2008?), climate change agreements between nations, and significant shifts in government power structures—from George W Bush left office to Barack Obama taking over as President of the United States for example. What does that tell us about what might happen during its current retrograde?

In other words, on April 29, the Planet of Transformation and Destruction began moving backward in the sign of Capricorn. Though the backward motion of Pluto’s orbit is nowhere near as erratic as to when Mercury moves backward, there are still many things for us to pay attention to during the astrological event until October 8, 2022.

The last time Pluto was in Capricorn was in 2008, which means we’ve dealt with all of its themes, including business, structure, patriarchal constructs, karma, and stability. Pluto retrogrades roughly once a year for around six months, so we’ve experienced this plenty of times before. We’ve survived and even thrived under its influence. As far as the central theme is concerned, much reflection is involved. Under Pluto’s influence, we are called to examine such things as our psyche, our subconscious selves, shadow work, and transformation, says Madi Murphy, cofounder of CosmicRX.

Although the effects of Pluto’s retrograde may take a little while to set in, they last longer. This astrological event is all about change. Use the theme of reflection to fuel your personal growth as well – Pluto’s a chameleon, so remember to turn its energy towards creating positive change.

Kalina Trifonova, a Nebula astrologer, recommends keeping an eye out between May 23 and 27. She says that it will be more apparent during this time how love works. If you are unsure about your actions for June 29, there is an outside chance that on that day, your challenges will occur and, as she advises, stand your ground, but be wary of being provoked to act impulsively.

This means Pluto is a planet all about transformation and facing our innermost shadow selves. So do not fear them and be fully aware of them. Murphy tells us that you can use this transit for your empowerment by looking at how you self-sabotage or get in your way and making minor adjustments. Now’s the time to ask yourself, what’s holding you back from your spiritual evolution? When you face them and decide to make changes, you will become aware you have way more power than you realize, explains Murphy.

Take stock of what’s going on in your life and where you need to make a change — Pluto moves slowly, so take your time, and the best will happen in the end.

Saturn in Aquarius pushes us toward practical solutions that advance society rather than our self-interests. It’s about taking on new ideas and beliefs based on collective human wisdom rather than following your gut or ego (which can sometimes work against you). It’s about balancing your vision for change and making it happen with personal hard work and thinking through how collective societal forces might block you from achieving what you want. Saturn retrograde is an opportunity to look at how we might be stuck, where we may be overreacting in fear or frustration to others, or where we may be trying too hard or not trying enough to make positive change happen.

Even though Saturn isn’t necessarily hard to learn about, the Planet does govern all matters related to order and organization. Annual occurrences include a four-month-long cycle when Saturn appears to go backward in its orbit. Saturn’s time as retrograde between May 23 to October 10 will challenge you to modify the structure of your life.

During this period, it is advised to slow down, balance one’s social life with one’s inner life, and examine what makes oneself tick to improve one’s life.

While faster-moving planets like Mercury or Mars moving in the reverse direction might generate confusion, that is not the case with slower-moving planets. Instead of being held back by exterior difficulties, a Saturn Retrograde forces us to focus inward and remember who we are and how far we have come.

Due to its alignment with stricter life codes, Saturn has been responsible for reigning in planets and zodiac signs. In this way, it has encouraged those subject to its light to put some limitations on themselves. Because Saturn is a karma planet, it holds one accountable for what society expects of us.

Whenever direct, Saturn can seem like a great put-down. However, when it’s in retrograde, it is instead an opportunity to take a step back and examine the various things that have impacted our decisions. We can observe what factors motivate us, such as fear, given this chance.

Saturn is reversed when our inner worlds take precedence over the external. This is when we look inward and are much more self-aware. Examining our past lives in this reflective period helps us understand and improve, then we’re set on the path we want to follow.

As of October 10, Saturn will start going direct again and cease being easy for us to play with. But before then, be self-aware!

Before Saturn moves backward on May 23, examine what you’ve been holding yourself back from doing so you can work on it for the next couple of months — Saturn blesses your ambitions!

Mercury Retrograde in Gemini and Taurus

Your belief system is being challenged or redefined somehow so that you may feel your sense of identity shifting. It’s an excellent time to revisit your past, think about where you came from, what led you here, and how it’s shaped your perspective on life.

In 2022, four whopping Mercury retrograde transits are happening across six zodiac signs. We now have the first under our belt since from January 14 to February 3 in goal-oriented Capricorn and visionary Aquarius. The second Mercury retrograde of the year is happening in Gemini and Taurus’s astrological signs from May 10 to June 3. Psychologist and social worker Monisha Holmes, MSW, says the message of this transit is to encourage individuals to reflect on their choices and what they’re doing.

As to the basics of Mercury and what its retrograde cycles tend to mean, “Mercury is the planet that represents communication, thinking, and flirting, among other things,” says Holmes. “When it goes retrograde, there’s an optical illusion that makes it appear to be moving backward. Mercury retrogrades are generally a time for rest, recycling, and retrospection.”

This retrograde will be a difficult one because it’s at the tail end of the eclipse season. Senior astrologer Narayana Montúfar, this transit carries a particular astral imprint. These intersecting events may cause us to feel somewhat destabilized.

Mercury rules Gemini, which says it’s exalted when it’s not moving backward. From May 10 to 22, it will be moving backward. The result is a week with a recipe for obstacles on your path, especially if you’re not on top of Mercury’s machinations. In an astrologer’s words, We get communication issues. We get misunderstandings. We get extra gossip. All of this drives home the importance of being mindful of what you are doing and saying during this time.

According to Astrologer Iva Naskova at Nebula, During Mercury’s retrograde phase in Gemini, May 10-22, it’s essential to take care of our mental health, but try to take it up a notch. It’s best if we make time to meditate, practice yoga, and find ways to calm our minds and gain clarity in our thoughts. Otherwise, this transit can be overwhelming, especially for Gemini and Virgo. Mercury, the ruling Planet of these signs, will be in direct opposition.

Montúfar explains that the Planet Mercury favors being in Gemini and is the more positive of the retrograde, helping people re-orient and go through profound changes.

In astrology, Mercury will enter Taurus on May 22, altering the vibe of Gemini-lovers to a more stubborn, diplomatic, and indulgent group. Many of us might feel an increased desire to take things slow and loosen up, says Naskova. Yet, if your schedule is saturated, this behavior will add nothing but stress and anxiety for Sagittarius and Leo, for whom Mercury is about to retrograde in their work.

When Mercury is in Taurus, the typically quick-thinking Planet doesn’t mesh well with the slow, mellow energy of the earth sign. During this time, it’s in our best interest to slow down and enjoy life. Make sure to rest from time to time and that leisure does not devolve into laziness.

Transit in Taurus + Saturn in Aquarius will now translate into limitations and challenging situations with authority figures. With Saturn, the Planet of Time, work, and mental energy invested now will be worth it in the long run.

As Mercury is shifting into Taurus this coming May 22, it might be good to account for unexpected things when planning. The shift is an excellent time to plan one’s beliefs and finances because those are two areas where Taurus enjoys stability.

Mercury’s retrograde period can be nerve-wracking, but it’s just one part of the astrological cycle. Mercury retrograde always marks a time of deep introspection when the universe asks us to slow down, Montúfar says. If we take time to reflect inwardly, the cosmic trend of Mercury going into retrograde can be helpful in anchoring and reconnecting to our center when we need it the most.