Who Were The Gods And Goddesses Of The Greek Pantheon? 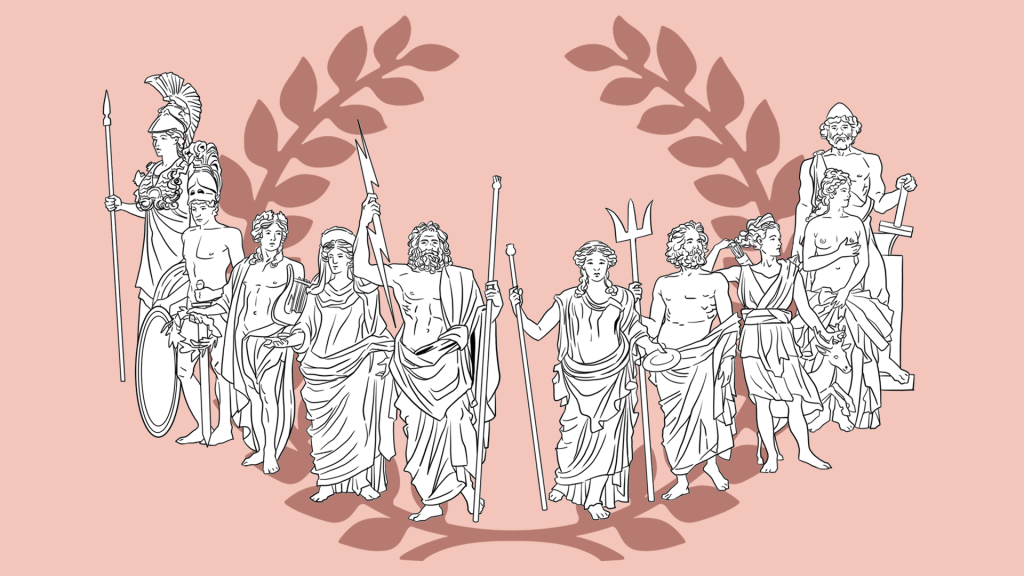 Greek mythology has given us many of the most enduring figures in Western culture, from Zeus and his wife Hera to the tragic figure of Prometheus. But who were these Gods and Goddesses? How did they rise to power? This list of the most important deities in the Greek pantheon will help you understand their power, personality, and divine responsibilities.

One of ancient Greeces most prominent deities, Zeus was also one of its most powerful. Ruler over all Olympians, Zeus was known as Father of Gods and Men. His dominion included justice, order, the sky, thunder, and lightning which he sent from a thunderbolt made for him by the Cyclopes. Though Zeus was officially married to Hera, his escapades were well known. Once, upon seeing the beauty, Europa, daughter of Agenor, King of Tyre, Zeus transformed himself into a white bull to curry her favor. Europa, thinking he was but a calm bull, climbed upon his back. Zeus immediately abducted her and brought her to Crete. And then there was that whole affair with Leto, where Leto gave birth to twins Artemis and Apollo right next door. Yeah, it seems Zeus wasn’t exactly faithful to Hera. But hey, being king has its perks! Though not necessarily monogamous by nature, Zeus did usually abide by an unwritten code of conduct regarding fidelity among the gods – meaning unfaithful acts rarely occurred openly because both parties risked embarrassment.

One of the original Olympians – twelve siblings fathered by the Titans Kronos and Rhea. Hera is married to her brother, Zeus. In most versions of her story, Hera is a jealous wife to Zeus and she always makes sure he never forgets it. She rules as queen over her kingdom on Mount Olympus. During most legends, Hera has children with Zeus that include Ares, Hebe, and Eileithyia. When Zeus marries other women, Hera punishes them, and in some cases tortures them in an attempt to prevent them from having anything to do with her husband or his home, Mount Olympus. Angered with Zeus giving birth to Athena, Hera ingested a magical herb that allowed her to procreate alone, without the help of Zeus. From this, Hera bore Hephaestus. Hera was the Goddess of marriage, family, women, and childbirth.

Poseidon was an important God in Greek mythology, known for his sea-wrath, though he was also a very caring God. He had power over animals including horses, dolphins, bulls, and seals. He was the God of the sea, earthquakes, and horses. Like the other first-generation Olympians, Poseidons parents were Kronos and Rhea. He married Amphitrite, Goddess of the sea and one of the Nereids. Poseidon fathered numerous children, including Charybdis, the sea monsters, and Polyphemus, the Cyclops, both of whom tried to kill Odysseus. He also fathered the Pegasus, Orion the Hunter, the hero Theseus, and Triton, the merman. One of Poseidons symbols is a trident which was used by his son Triton during marine battles. Another symbol associated with him was the horse, this is due to Demeter tasking Poseidon with creating the most beautiful creature on earth. Thus, the horse was born.

She was a goddess associated with motherhood, agriculture, fertility, and harvest. She was frequently depicted in art as a matronly woman dressed in a long cloak covering her head and body. The story of Demeter is an interesting one. After Hades abducted her daughter Persephone from Earth, Demeter heard her cries, but it was too late. Hekate, the Goddess of witchcraft, the moon, and hell-hounds, who also heard Persephone, brought Demeter to Helios, the Sun God, who told her what he had seen. Demeter walked the earth aimlessly for months, clouded by grief, which caused all the flora of the world to stop growing. Eventually, in order to stop the famine brought about by Demeters grief, Zeus ordered Hermes to go to the Underworld and return Persephone to Demeter, providing she had not eaten anything from the Underworld. However, having eaten three pomegranate seeds, Persephone was forced to spend ? of the year in the Underworld with Hades, and ? of the year on the earth with Demeter. This accounts for the changing of the seasons and the lack of growth in the winter months.

Apollo is the God of music, healing, oracles, archery, knowledge, prophecy, sunlight, herds and flocks, and many other things. Apollo is the twin sister of Artemis, and the son of Zeus and Leto. Apollo was considered the epitome of beauty in Ancient Greece. He was the patron deity of Delphi due to his association with prophecy and the Oracle at Delphi. Apollo is also associated with healing and medicine, mostly through his son, Asclepius, who was the God of medicine and carried the Rod of Asclepius, which can be found depicted in the symbols of many emergency medical services around the world.

Artemis is known as the Goddess of the Hunt. She is also the Goddess of the moon, chastity, wild animals, and the wilderness. She is a virgin goddess who had little interest in getting married, but despite this, she was also worshipped as a Goddess of midwifery and childbirth. Artemis is famous for being a master archer who helped humans by intervening in battles or granting oracles that helped drive important decisions. She also protected young animalswhether they were actual creatures or girls who hadnt yet reached pubertyby turning them into deer. It was believed that no hunter could kill one of these deer since they were under Artemis protection. Artemis hunted with a band of maidens she called The Hunters, to whom she granted eternal youth and immortality, so long as they never broke their vows of chastity or were slain in battle.

Ares was one of the 12 major Gods in Ancient Greece. Ares embodied violent conflict, passion, anger, war, and courage. He was the God of war and spirit in battle. He was also a significant god in many myths involving Herakles. Ares never married, though he is often depicted alongside Aphrodite, with whom he bore seven children: Eros, Phobos, Deimos, Harmonia, Pothos, Anteros, and Himeros. Due to his ferocity, Ares wasnt widely worshipped in Ancient Greece and was often the butt of jokes among the other Olympians. One notable story of humiliation tells of the time Hephaestus caught his wife, Aphrodite, in the midst of an affair with Ares. The God of metalworking trapped the two in a net and hung them at Mount Olympus to be ridiculed and mocked by the other Olympians.

Aphrodite was a goddess in Greek mythology borne from the primordial deity Ouranos’ genitals. Kronos, son of Ouranos, sliced off Ouranos genitals with a scythe and tossed them into the sea. Where they landed, the water began to boil and froth, and from the seafoam arose the adult form of Aphrodite. She represents love, beauty, and sexuality. Her symbols are doves, myrtles, roses, sparrows, and swans. Despite how famous she was in Greek mythos (she has two plays dedicated to her), there were no temples erected for her worship until around 300 BCE when Lysicrates erected one that still stands today (it’s located at 9 Bounarhou Street in Athens). Her worship peaked between 300-100 BCE.

Hephaestus is a master craftsman who forged everything from weapons to jewelry for his fellow gods. He is the God of forges, metalworking, masonry, blacksmiths, and technology. Hephaestus was born when Hera ingested a magical herb in a revenge plot against. However, Hephaestus was born lame and thus was cast out of Olympus by Hera and Zeus. He crafted a golden throne for Hera as revenge, for once she sat on the throne, she could not stand back up. The Gods begged Hephaestus to return and release Hera, but he denied having a mother. Eventually, Dionysus made Hephaestus drunk with wine and carried the God back to Olympus on the back of a mule. Hephaestus was the only God to return to Olympus after being exiled.

Athena is a mighty, powerful goddess in Greek mythology. Athena is a daughter of Zeus. Zeus swallowed Metis, a second-generation Titaness and Oceanid, while she was pregnant with Athena. Athena then burst, fully formed, from Zeus forehead. She is often known as Pallas Athena, a name which she took on after accidentally killing her childhood friend, Pallas, daughter of Triton, during a sparring match, so that her friends name would never be forgotten. Aside from Pallas, Athena also holds many other epithets, including Athena Parthenos (virgin), Polias (of the city), Hipaa (of the horses), Ergane (the industrious), and Promachos (she who fights in front). Athena often feuded with the other Olympians. Her feud with Aphrodite and Hera led to the beginning of the Trojan War.

There is so much more to know about this incredibly diverse and interesting pantheon, and we hope this little glimpse into it has piqued your interest!