Types Of Witchcraft? Magick In A Nutshell 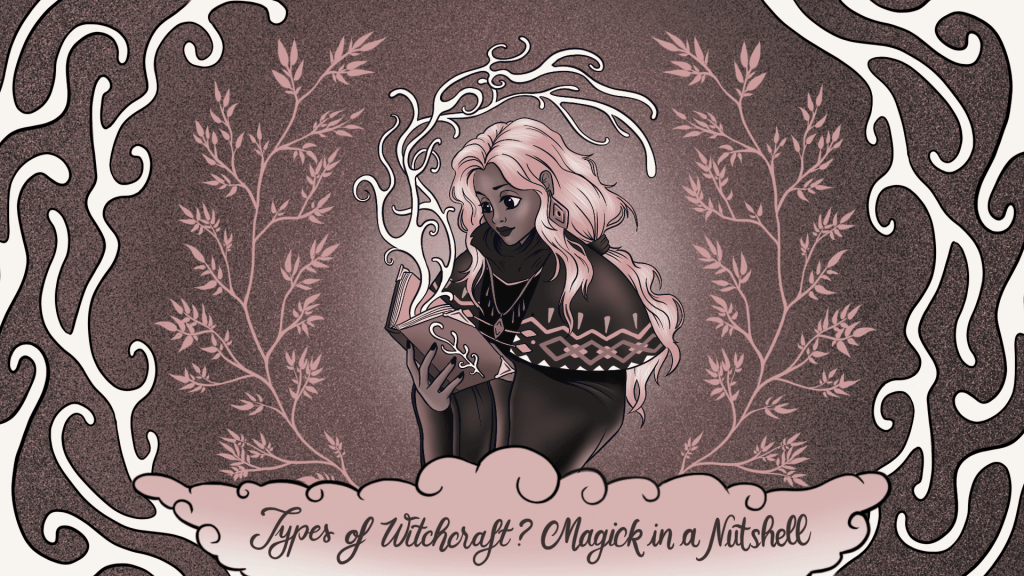 You see, magick, as we know it, is a neutral force. It is neither good nor evil. It is the intention of the Witch that determines whether that force will be used for good or bad, but the force, itself, is not inherently either. Think of it like a knife. I can use a knife to cut up some fruit for a snack, or I can use it to kill someone. It’s my choice that determines what the knife will be used for, not the knife itself. Fire can be used to light my hearth and warm my home, or it can destroy my home. But is that fire inherently destructive? No, of course not. The same can be applied to the force that is magick.

There are “good” witches and “bad” witches. Witches who cast spells for protection and healing, and those who cast hexes and banishments. The magick they both use is the same. It’s the intention behind their castings that differentiates between good and bad.

So let’s take a quick dive into the practice of witchcraft and magick in a nutshell.

What’s With The K?

If you’re new to the craft, you may be wondering why you often see the word “magic” written with a K at the end.

Though the word with a K at the end can be found in some older texts referring to the practice of witchcraft, that was long before spellings became uniform and the K was dropped from the word across the board. As it is used these days, the word “Magick” was coined by Aleister Crowley, founder of Thelema.

He stated that he added the K in order to differentiate the magick that he performed from that performed by stage magicians.

However, whether you spell it “magic” or “magick” (or even one of the other less-used spellings like, “majic,” “majick,” “magik,” or “majik”), is a personal preference, and is completely up to what you feel most connected to.

Witches, Wizards, and Warlocks, Oh, My!

Despite what Harry Potter, Charmed, and other pop culture media may have you believe, the word for a male witch is neither a wizard nor a warlock. It’s actually just “witch.”

Warlock, on the other hand, originally meant “oath breaker” or “deceiver.” The term being conflated with male practitioners of witchcraft arose from the idea that practitioners made pacts with the devil in order to perform their crafts, and so they were believed to have broken their oaths to God by discarding their baptismal vows.

How Do I Practice Magick?

This isn’t really a question that we can answer for you. There are many different ways to practice and many different spiritual paths you can follow. Wherever your heart leads will show you how you practice.

Most practitioners, however, either follow a specific spiritual path, like Wicca, Hellenism, Asatru, or any of the hundreds of others, or they deem themselves, eclectic witches. This means that they follow a path they’ve created themselves which pulls from different spiritual paths. Some are coven-based, and some practice alone. Whatever you’re most comfortable with and connected to is okay. That’s the beauty of witchcraft. We don’t tell you what to believe, and we believe that the truth lies in the practitioner’s belief itself. Many other faiths will tell you that their path is the One True Religion. Pagans, however, believe that all religions are the One True Religion for those that practice that religion. Beautiful, right?

How you choose to practice will be what categorizes your witchy self. Are you a kitchen witch? Or a sea witch? Maybe you’re a hedge witch or a green witch. Maybe you want to be part of a coven or prefer solitary witchcraft.

We know that for beginners and baby witches, all of this can seem pretty daunting. That’s why we created Coven Cloud. We wanted somewhere for seasoned witches and newbies to the craft to come together and learn from one another. We’re a collective of witches from many different paths and who follow many different pantheons. We share stories, spells, and blog posts to teach others about our beliefs and learn about the beliefs of others. We’d love for you to join us. Welcome home, witches. You are safe and loved here.