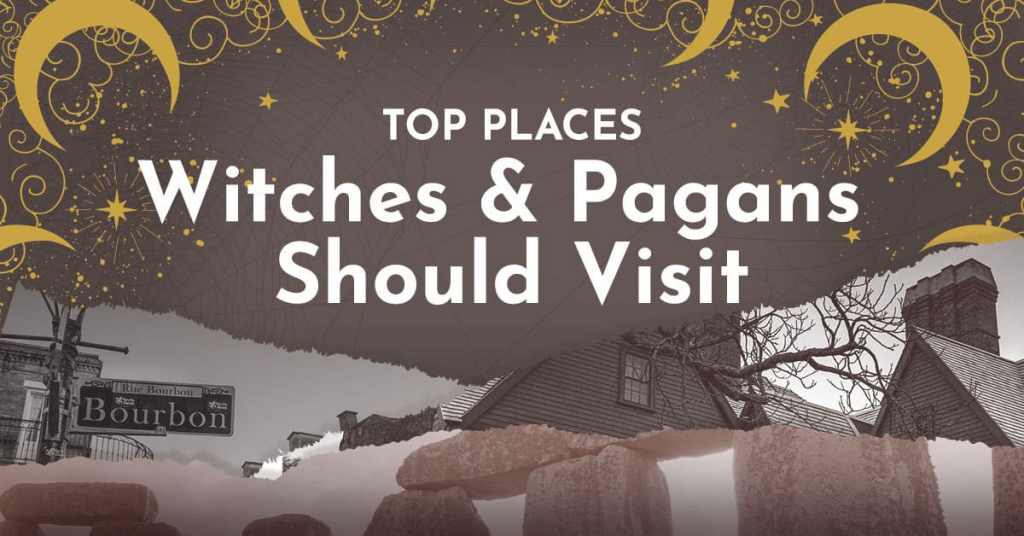 We’ve compiled a list of the best places to travel to as a witch or pagan that you definitely need to add to your bucket list. The world is full of incredible wonders, historical sites, and magical spots. Don’t forget to let us know where you’ve been and how you felt about the energy of the location in the comments below.

Perhaps one of the most well-known and visited destinations for witch enthusiasts, Salem, the site of the Salem witch trials, now embraces its witchy reputation and offers several witch museums, tours, cemeteries, and filming locations for classic Halloween films like Hocus Pocus.

The Salem memorial to the 19 people hanged for witchcraft during the trials is just a short walk from the Peabody Essex Museum. The museum offers beautiful art and historical exhibits, particularly for such a small town.

There are also several picturesque cemeteries and The Witch House – a museum dedicated to showing what 17th-century life was like in Salem. In the 1970s, there was a reclamation of the region by local witches. Laurie Cabot, one of the area’s most famous, opened the first Salem occult shop. All this work gradually turned Salem into a witchcraft tourist destination.

New Orleans is a center of magic in America, thanks to its amazing history of Voodoo and Hoodoo. And let’s not forget the incredible legend of Marie Laveau, a famous healer and Voodoo priestess. You can visit her monument grave on a guided tour, and learn more about her and the offerings and petitions people leave at her tomb.

You can also dig deeper into the history at the Historic Voodoo Museum in the French Quarter or with one of the many tours. For more neo-Pagan vibes, you can pop into the shop Hex for readings, crystals, herbs, and more, with plenty of formulas inspired by West African traditions and Laveau herself. It’s one of the most popular occult shops, but certainly only one of many!

New Orleans is arguably one of the best cities for witches, with a seriously mystical history and supernatural energy. You can tour the gorgeous cemeteries and learn all about why they couldn’t bury their dead, take a haunted tour of spooky locations, or even take a vampire tour that’s sure to thrill. This city has incredible food, music, nightlife, history, ghost stories, and everything else you could want.

Stonehenge was built to align with the sun on the sacred solstices and equinoxes. The summer solstice, the longest day of the year, is in June in the northern hemisphere. The winter solstice, the shortest day of the year, is in December in the northern hemisphere. Cultures have observed these holy days worldwide for millennia, several of whom built structures and monuments to align with the sun at pivotal moments during the year.

Stonehenge is a stone circle in England believed to have been constructed by ancient Druids before 2000 BCE.

It is considered one of the most spiritual places in the world. On the summer and winter solstices, the sun rises and sets between a particular set of stones, shining into the center of the monument. You can tour the site but unfortunately can’t get too close because people have vandalized it in the past. It’s still incredibly spiritual, and you can feel the power when you’re there.

Edinburgh is one of the two chief cities in Scotland (the other, Glasgow, is about an hour away). It’s a beautiful, historical place filled with magic. Like Salem, it has a history of witches. However, it’s a sordid and tragic one of witch trials and executions. It, too, has been reclaimed by several modern witches and neo-pagans. The Witches Well, a memorial to the mostly women executed near Edinburgh Castle between the 1400s and 1700s, is a must-see.

The well features beautiful carvings of plants, including foxglove, goddesses, and protection from the evil eye.

The Witchery, a spectacular hotel and restaurant, is nearby and a great place to book a reservation. Harry Potter fans and lovers of wizards and witches in film and literature will love Edinburgh. There are several inspirational and film locations, including Victoria Street, which is said to be the inspiration for Diagon Alley.

Savannah, Georgia, offers a haunted history and incredible mystical energy. The massive moss-covered oak trees, some as old as three centuries, of Savannah are incredibly beautiful and give the area a mystical vibe. The connection to nature there is so old and wild, even in the city’s heart, that it makes for a truly unique setting. Arguably the most famous and most haunted site in the Bonaventure Cemetery. You can also take ghost tours, visit museums, and enjoy the warm summer air.

About an hour south of Savannah, GA, you will come across an area called Brunswick, GA, with a string of islands nearby. On the island of St. Simons in Glynn County, GA, you will find Igbo Landing in Dunbar Creek. In May of 1803, West African enslaved people from the Igbo tribe survived the Trans-Atlantic middle passage and made it to Savannah with 400+ other enslaved people on the slave ship, The Wanderer. Seventy-five people were purchased and then resold to nearby plantations on St Simons Island. They traveled under the deck of the York coastal vessel, which took them to St. Simons Island. While chained, they took over the ship and caused the ship to ground in Dunbar Creek.  While singing, they marched together to the shore and then to Dunbar Creek to commit mass suicide. Today this event is considered the first freedom march of the United States, has a roadside marker in St. Simons, a mural in Brunswick, and has been included in the Coastal Georgia School Curriculum. Locals feel this area is haunted, but in recent decades, the local community, Igbo practitioners, and leaders from around the world have continuously come to the site to heal the area and allow the souls to rest. If you visit, come with healing energy.

This city boasts several metaphysical supply stores and yoga retreats, and many spiritual tourists are drawn here. Sedona offers potent mystical energy and is home to the famous red rocks. It’s most well known for its energy vortexes, places of swirling energy that can offer enlightenment, spiritual healing, and contemplation.

For many, the vortexes are the most healing places in the world. Visitors can schedule a tour or ritual at a popular spot, or they can travel on their own to experience the energy of Sedona for themselves.

Midsummer is a huge event in Sweden. On Midsummer eve, people decorate their homes with flower garlands, maypoles go up for dancing, and smorgasbords of pickled herring, meatballs, and Swedish specialties abound. Outdoor, communal gatherings pop up all over the beautiful region of Dalarna, and traditional solstice celebrations light up the area.

Dublin, Ireland’s Féile Draíochta The Féile Draíochta is a small, yearly event in Dublin known as Ireland’s festival of magic and spirituality. The day festival offers talks, workshops, exhibitions, and more. It’s a lively celebration similar to a traditional céilí, pronounced kay-lee, a Celtic gathering with singing, dancing, and storytelling. Tarot readers are another prominent staple, and you can have your fortune read by several.

While the Pacific Northwest encompasses Oregon, Washington, and British Columbia, Mount Shasta is the gateway to this magical area.

Mount Shasta is a potentially active volcano at the northern edge of California near Oregon and one of the most sacred places in North America. Surprisingly, Shasta is not a national park, but the Shasta-Trinity National Forest administers it.

Mount Shasta holds many myths and legends from the Klamath, Modoc, and Yahooskin tribes. Members hold rituals on the holy mountain, which is also the subject of witchy and mystical attention, with connections to the Starseed legends of Lemuria and often referred to as a global power center.

Machu Picchu s an Incan estate constructed in 1450 CE for the emperor of that time. Several elements align with the solstices similar to Stonehenge, including the Temple of the Sun (Torreón), the Intihuatana ritual stone, and a special ritual cave where you can watch the solstice sunrise.

And if that’s not enough, here are even more amazing places you should check out:

Have you been to any of these locations? If so tell us about the energy of them in the comments or jump into the Blog Discussion Group on Coven Cloud.