The Wheel Of The Year 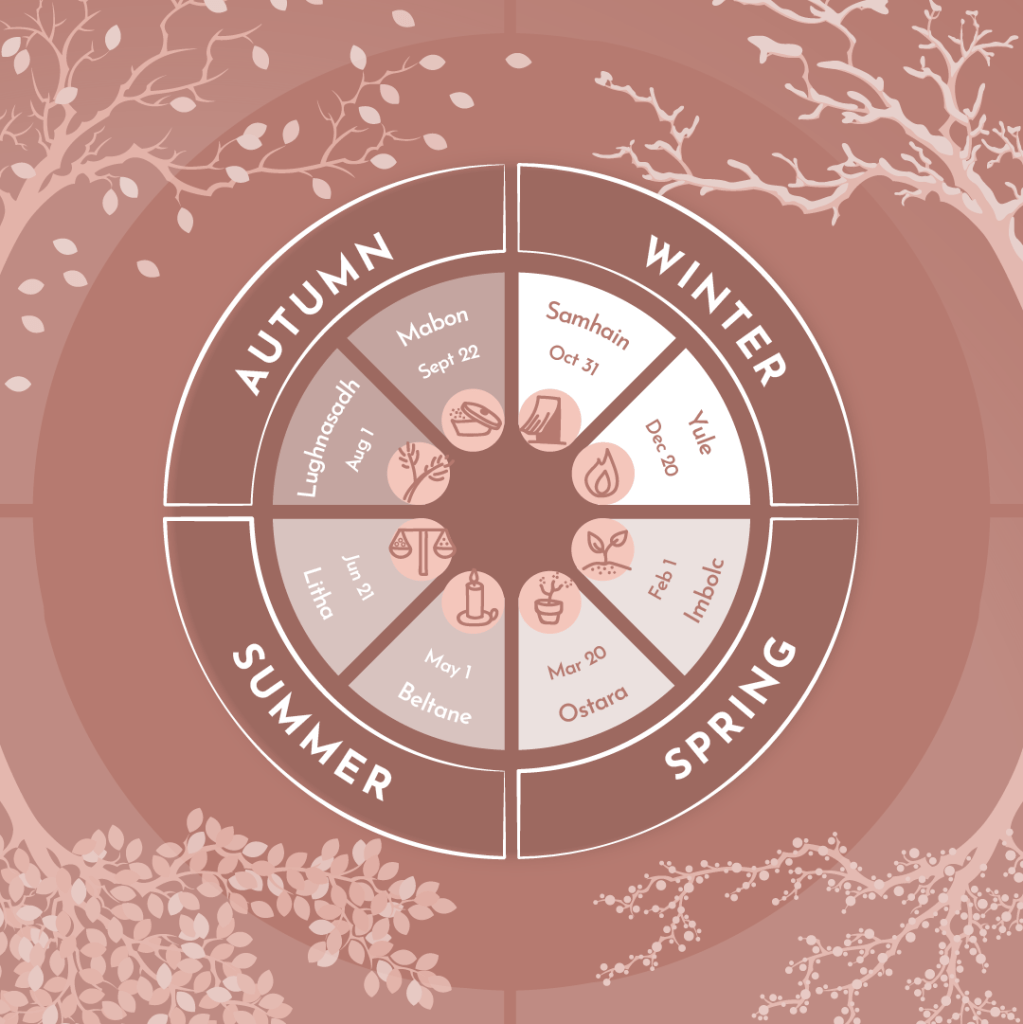 The following eight holidays have been honored or celebrated in one way or another for thousands of years.  While we may not know exactly how long there are ancient roots to these days of celebration, sacrifice, and renewal.  They are based on the seasons and the changes to the Earth that these newly agricultural people saw being vital to their survival. Below we will examine both ancient and current day practices.

Set on the date of the winter Solstice the exact date of Yule varies and was originally celebrated over three days. Yule was the longest night of the Year.  The solstice is a time for comfort, affirming that the half -way point had been reached and soon the days would grow longer, and summer would return.  The traditional Yule log is burnt at this time. Often the very end of the Yule log is preserved. Some traditions involve extinguishing the Hearth fire and relighting it with the end of the previous years Yule log end to symbolize the continuance of one flame and to show the end of the dark conquered by the light. Here we witness the rebirth of the god as the Horned God.

The first spring festival marks a farewell to Winter. It is time of celebration of the life just beginning to bud forth from the earth. This also marks the festival of the Brigid, known for her protection of domesticated animals as well as other domains.  People sometimes leave items outside for the blessing of the goddess and leave her offerings. This also is a time of divination and pilgrimages to holy wells to know what the year ahead would hold (originally for the crops and livestock). This holiday also may be where we got the idea for Spring Cleaning in the West as it is also a time of purification and cleansing.

While there is great debate around the particulars, Ostara is said to be the modern name for a goddess of springtime and fertility honored at this time of the Year by ancient Celtic and Gaelic people.  She was a goddess of hares as well (Easter Bunnies anyone?) Ostara can closely coincide with the Christian Easter however it does not have the same ideals. Ostara is a time for rebirth and re-dedications. A great way to celebrate Ostara is to connect with the coming of the first shoots from the grond.it can also be a good time to plan and prepare a spring garden.  Even in apartments or urban areas many simple herbs can be grown in pots.

Beltane is the origin of the secular holiday May Day.  It is the third spring festival again celebrating fertility. In ancient times bonfires would be lit and people would walk and lead their livestock in between them to protect them.  Some traditions still do this today (also with their pets), using torches or candles where a bonfire in not feasible. Another tradition being revived in modern circles is the Gaelic practice of extinguishing the hearth fire and restarting it with a torch or candle from the Beltane fire. May pole dances are also often done at gatherings or covens as are the ritual signifying the union of the God and Goddess.  These are of course, purely symbolic in nature in almost all traditions.

The day of the summer Solstice is the longest daylight of the year. This was celebrated with, again, bonfires and dancing and is till celebrated with fire rituals today. It was basically the last chance to party hard before the harvest festival, which involved serious hard work. Essentially the nights get longer after this day.  So, there is a symbolic battle between the light and the dark, acknowledging that balance in necessary in all things.  It is also celebrated as a day of inner power and light. Litha was also the occasion for many handfastings and a great time for love magic.

The first harvest festival, this is the time when people would reap and store the crops for the long winter. A time of great celebration and appreciation for the gifts of the year with a large feast would take place, like secular Thanksgiving Day.  Most often the Celtic God of light and the Sun, Lugh is honored on this day. It is a time also to acknowledge that the days are growing shorter and the nights longer. This is also a good time to ask your spirit guides to guide you towards abundance.

Mabon is the second harvest festival when all the bounty of the earth had been collected and stored.  Again, a great feast is held to end the season. Modern witches often have potlucks as this time with season themed foods and drinks. Thanksgiving is again offered to Mother Earth. Also, a time to give thanks for the security of the home and pull out those winter furs and linens. A slightly more muted festival, it was focused more on family and friends.