The Celtic Goddess Of Healing, Brigid 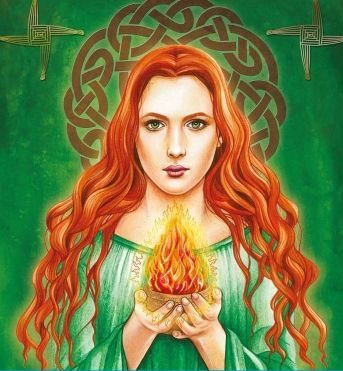 In the mythical narrative, Brigid is the daughter of the Dagda, a figure in Irish mythology, and one of the Tuatha De Danann, or Children of Danu. Her name appears to have been derived from an ancient Proto-Celtic word meaning high, perhaps alluding to her position as a goddess of spring season and healing. In Celtic culture, goddesses were often associated with holy wells and streams natural locations where water was found so many have been linked to Brigid.

Who is the Celtic Goddess of Healing?

In Celtic myth and legend, many gods and goddesses have various powers. Some can control the weather, while others have special abilities over time and matter. In Ireland, there was a triad or trio of goddesses known as The Morrigan, whose magic could turn dead bodies into birds to fly through time and space. While these three sisters were not exactly a band of sunshine-and-roses type folks (think more The Crow than anything), they did embody one of Irish cultures most deeply held values: an acceptance that life is full of wonder but also laced with cruelty.

In contrast to the brooding aspects of Morrigan, Brigid, in pre-Christianity Ireland, was regarded as the Celtic goddess of healing, spring season, and even smithcraft. In the mythical narrative, she is the daughter of the Dagda and thus a member of the Tuatha D Danann. Oddly enough, in Lebor Gabla renn (The Book of the Taking of Ireland collection of poems compiled in the 11th century AD), she is described to have quite a few domesticated animals, ranging from oxen, the king of boars, to sheep that cried out in warning to the goddess.

Is She Worshiped Today?

Worshiping Brigid is nearly impossible due to her affiliation with Christianity and Ireland, but several remnants can be found in Irish culture. One such remnant is Saint Brigids cross. This Irish Christian symbol featured a circle enclosing a Latin cross and was used as a focal point for pre-Christian rituals. Theres even an island off Scotland named after her: Islay. This island is home to two white horses that appear on many depictions of Pagan Celtic goddesseseven Mother Nature herself! Because these horses are white, it suggests purity and innocence, which highlights her healing aspect. Although shes no longer a part of modern Paganism, she has left behind a legacy that will always keep her in our hearts and minds.

How Did She Become a Saint?

The legend goes that a pagan druid named Dubhthach was so impressed by Brigids healings and piety that he converted to Christianity. In his new faith, he saw something special in Brigid and took it upon himself to train her in all things holy. He christened her with a new name: Saint Brighde. Legend has it that when she died, a spring miraculously opened up under her feet. Dubhthach found a place for his school at that site and called it Croi Brighde or the crozier of Brighde. And while it no longer exists today, you can still see where she used to live at Kildares very own Saint Brighids Well. Goddess to Saint is a significant downgrade. Is this Patriarchal? The spread of Christianity across the British Isles stripped them of a wide variety of feminine deities.

What Are the Benefits of Worshipping Her?

In Irelands pre-Christianity days, the god Dagda had a daughter named Brigid. She is considered one of his three daughters. However, Brigid was a goddess associated with healing, unlike her two sisters Badb and Macha who were both goddesses of war and death. To celebrate her patronage over their household and hearth and to pray for favor with her domain over animals and fertility, many Celtic people would offer her during midwinter, which was called Imbolc (or Candlemas) by Christians.

How to Worship Her

Worshiping a deity is more than just reciting their name three times and crossing your fingers. If youre interested in learning about Brigids legacy as an Irish goddess of healing or are looking to honor her with a ritual or spell, start by learning more about her life story. To get started on your research, use Google Scholar to search for Brigid mythology or read some books on Celtic spirituality. Once you have a firm grasp on who she was historically and what she represents spiritually, begin reflecting on how you want to honor her. You can create an altar honoring her or perform a ritual that uses candles or incense.