Occult on Film: The Skeleton Key 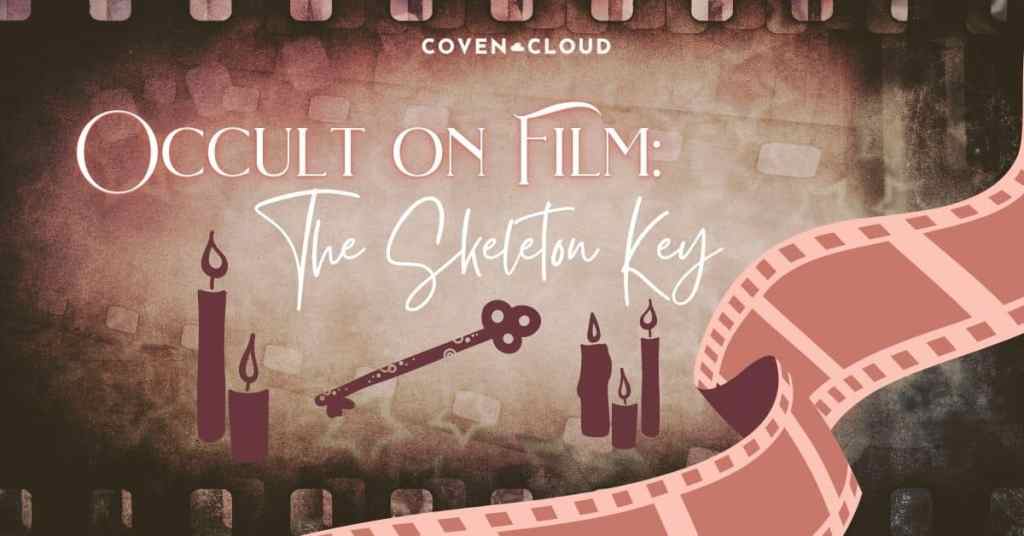 I’ve never been one to watch horror films. Mostly because I know many horror films are loosely based on reality, and sometimes the actual historical account is much more gruesome than what Hollywood allowed. While I was at the library studying the occult as a kid, I was also studying serial killers and mass murderers because I wanted to be a forensic psychologist. I learned a very real fact – monsters are real, and they appear to be human. When The Skeleton Key was suggested to me, I watched it because it was listed as a Thriller. What could be so bad? I loved Louisiana Voodoo/Hoodoo films. Eve’s Bayou is still one of my favorites. It was the reason why The Skeleton Key was suggested to me that shook me for a long time.

No matter how far people go with metaphysics and the occult, there are times when we may pause on our craft. For some, it is to regroup. For me, it was because I needed guidance. I was highly gifted and had done so much research, but I didn’t have anyone in my life to turn to for advice. The movie-level experiences spirits put me through, plus having a more experienced person attempt to take advantage of me, made me pause. So what does this have to do with The Skeleton Key movie?

During my spiritual pause, I didn’t return to Christianity as many people do. I’d been out of the church since eight-years-old. My desire to understand myself and my purpose were strong, so I still studied spirituality and human abilities but went toward understanding my soul over advancing my capabilities with spiritual tools like tarot cards and pendulums. I started reading Sonia Choquette, Thich Nhat Hanh, and Don Miguel Ruiz‘s books.

Your Calling Will Find You

You can take a break, pause, and even leave, but your calling will find you and sneak up on you in the most unlikely ways. Strangers will reach out to you, even children. The 1111s, 777,s 444s, and all the other numbers that pop up to remind you that you are more than a cog in the wheel of society won’t stop.

One day while at my sales job, my manager handed me a lead. I called the lead, and it was a lady who owned a skincare line. She was so warm and friendly. She was so enthusiastic about her business, the ingredients, and her signature process. After speaking to her on the first day, she sent samples for my mother and me. This wasn’t the normal one-call close my boss preferred. The business owner wanted to speak to me for lengthy amounts of time, and whenever I went in for the close, she would magically have to put me on hold. This was enough to drive any sales manager crazy.

On the day of her sale,  she asked me how I liked my job. The monitoring wasn’t as advanced, so I told her about how I was getting ready to leave for a new insurance job. She abruptly said, “That’s not what you are supposed to be doing.” I said, “Well, what am I supposed to be doing?” She says, “You know, but you probably forgot.”  There was a long pause because I didn’t know what to say. In my heart, I knew what she meant but couldn’t put it into words or accept it as my reality because I was still insecure about where I stood with it.  “Have you ever seen The Skeleton Key?” she asked. I told her I hadn’t. “Watch it and get back to me,” she replied.

My curiosity was on a level that I can’t explain. I watched the movie because I wanted to understand what she meant. Our conversations let me know she was aware that I am not like other people and that she sensed the witch in me. That alone was refreshing because there weren’t many people in my life with which I could speak freely about these topics.  I was in a relationship, but I watched the movie alone. We were close, but there were some things I didn’t even feel comfortable sharing with him.

I thought it would be similar to Eve’s Bayou because of the setting. When I say similar, I meant that it might include the mysteriousness and drama that is that natural vibe of Louisiana. Outside of the location, it was nothing like Eve’s Bayou. There was no blood or gore, so I hesitate to call The Skeleton Key a horror film, but it still shook me to the core.

It was years before I got back to the lady. The film shook me because of how real it was. I’ve watched all the greats of southern Hoodoo/Voodoo films, but this was the next level. I felt it in my spirit, and it took me years to get back to the woman because I had more growing to do. Reading books and studying is great, but allowing your soul to grow in the process is a whole other thing. Over the years, the occult kept calling for me through the right situations and conversations, even tragedies that forced me to go deeper.

Why Was The Skeleton Key So Personally Impacting – Spoilers Ahead

Last year, I showed the movie to my daughters. They were 16, 9, and almost 2. They grew up in a home with incense, crystals, spiritual books, and conversations about Hoodoo, Voodoo, witches,  ego, shadow, rituals, tarot, and soul journeys.  My oldest loves horror films, and The Skeleton Key was the only film that scared her. Over a year later, she still talks about how much it stuck with her and even made a TikTok video about it. The middle child was in awe.  She never seemed scared but was fascinated by the possibilities of what happened. The youngest didn’t care. However, she has always been attracted to my magical tools, so I’m sure we will watch it again when she gets older.

The Skeleton Key touched me in my soul. It made me uncomfortable because I felt its truth. The lead character did so many things I would not do, but that’s the nature of horror and thriller films. The funny part about it was all the people in the film who told her not to do certain things.  As a person who was taking a break from the occult, I feel like the lady I met over the phone at work was really a messenger telling me to tap back into my calling and my purpose. Here is a list of ways the movie impacted and touched me.

That lady who called my job to make a purchase, whose contact information landed on my desk because my manager handed it to me, saw me for who I was when I was still in the fog. To be seen when you are not even ready to see yourself is scary, but here we are, and these days people pay me to do this for them daily. It would be years after I watched the movie before I reached out to the lady as she requested.

After watching the movie, I worked harder on trying to improve my psychic abilities – advancing them and controlling them. So many of my previous mediumship experiences were wild, uninvited, out of control, and sometimes horrific. Before I got involved with other spirits, I wanted to empower my own spirit. This required so much shadow work, healing, and practice with mentors. Since I was five years old, my curiosity has pushed me to uncover the truth of who I am. Waking up exactly at midnight on a regular basis from dreams of mass amounts of snakes moving around will do something to a child.

Life has provided me with the drive, experiences, people, and even narcissists as catalysts for growth and change. The woman who called my job was a messenger holding the catalyst that is The Skeleton Key.

Have you seen The Skeleton Key? I want to hear how you felt about the movie. Have you ever taken a break from studying or practicing your craft? If so, why? Leave a comment, or let’s have an enclosed conversation in Coven Cloud.