Sirens of the Sea: The Mermaids 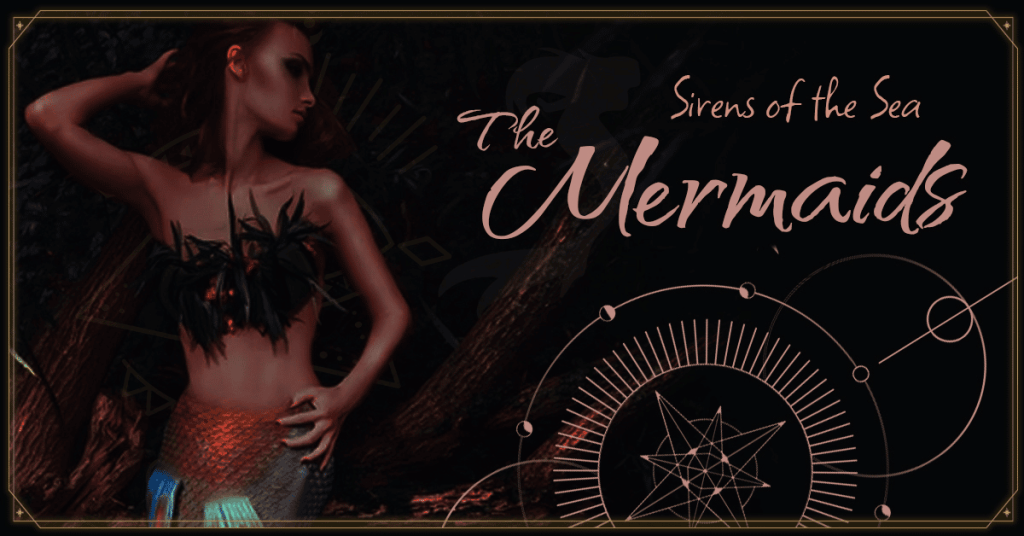 As mythical creatures go, mermaids may be some of the most famous ever conceived. Mermaids are said to have the upper body of a beautiful woman with long flowing hair and the lower body of a fish. In some stories, mermaids would sing to sailors. Their haunting songs would lure them off course. Sometimes they would fall in the water or crash ships into rocks, leading to their watery deaths.

Mermaids Around The World

According to Greek Mythology, the sirens may have become carnivorous monsters, eating men, after Hades abducted Persephone. Sirens were also said to be Persephone’s companions. Her mother, Demeter, was upset when they didn’t prevent her daughter’s abduction. So she cursed them to die if a mortal was able to resist their beautiful songs. Demeter may have also given them wings to fly in order to help find her daughter.

In Scottish folklore, Kelpies were thought to be shape-shifting horses that kidnapped people or lured them into watery graves. Atargatis or Derketo, a goddess of Syrian origin, was represented as half woman and half fish. She was furious when a sea merchant spied on her while she was naked. She killed him and turned him into a fish. She took pity on his daughter, Iara, and gave her special powers to control storms.

The recent outrage over the casting choice of the live-action version of The Little Mermaid brought more attention to what most of the world already knew – mermaids are global. Articles on mermaids from different cultures around the world are below.

Mami-Wata & The Mermaids in African Mythology

No Ariels Here: 16 Mermaids From Around The World

Songs Of The Sirenas: Mermaids In Latin America And The Caribbean

How much of this lore is actually rooted in fact? Are there any real mermaids? What do we know about these creatures from history? Why do so many people still believe in them today?

What are some fast facts about mermaids?

Evidence found by divers suggests there is something out there. Legends abound of the Celtic and Norse Selkies (seals who shed their skin and assume human form), Iara in Brazil (beautiful women who lure fishermen to death), and the Nykr in Sweden (humans that transform into animals), and the Scottish Kelpies (water spirits). Humans have encountered something powerful in our oceans. Were tales of dangerous sirens inspired by actual events? Some likely came from a very real human fear of unknown creatures in waters around the world. Sailors explored uncharted territories and encountered wildlife and indigenous peoples. For example, there are many accounts describing Selkies in remote coastal areas in Ireland and Scotland, as well as mermaid sightings off Japan’s coast during World War II.

In some mermaid legends, it’s said that sailors mistook manatees, or dugongs, for sirens and attempted to rape them. If you’re not sure what a manatee is, click here.

Stories about men raping fish-like creatures came from sailors who had spent too much time at sea. In Medieval times, and even as late as WWII, many ships lacked toilets, so sailors relieved themselves in buckets below deck. Maybe this is where some of the stories began.

Ancient Greeks were known to make sacrifices to Poseidon – god of the sea, earthquakes, and storms. According to mythology, these sacrifices included virgin women they tied up before throwing them into the waves. This alone may explain why sailors would fear these beautiful half-human creatures.

Greek, Hindu, and African beliefs include mermaid mythologies. Triton, a Greek god, was a merman messenger of the sea. Hindu teachings discuss mermaid goddesses. In African mythology, a mermaid water spirit is Mami Wata in the west and Mamba Muntu in the east. Our culture continues today with depictions of mermaids like Ariel and Ursula from The Little Mermaid. Even Disney has Ariel’s voice taken away by Ursula’s powerful song.

In her book “Seduction and the Secret Power of Women,” Meri Lao notes that “In the Shetland Islands, mermaids are stunningly beautiful women who live under the sea; their hybrid appearance is temporary, the effect being achieved by donning the skin of a fish. They must be very careful not to lose this while wandering about on land because, without it, they would be unable to return to their underwater realm.”

Hundreds of years ago, sea serpents and mermaids were believed to be among the mysteries that were hiding deep in the world’s vast oceans. Charles J.S. Thompson, a former curator at the Royal College of Surgeons of England, wrote The Mystery and Lore of Monsters. He said that traditions about half-human, half-fish creatures have existed for thousands of years. One example is the Babylonian deity Oannes. He was a god and was depicted as a fish-human creature.

Mermen are fearsome in the summoning of storms, in the sinking of ships, and in the drowning of sailors. While lesser-known than mermaids in the modern world, the legends of mermen actually predate any mention of mermaids. One particularly feared group, the Blue Men of the Minch, are said to live in the Outer Hebrides off the coast of Scotland. They look like men with gray beards and blue-tinged skin. According to local lore, before besieging a ship, the Blue Men will often challenge the captain to a rhyming contest. If the captain is quick-witted and deft of tongue, he can overcome the Blue Men and save his sailors from a watery grave.

We knew of the existence of mermaids during medieval times when we pictured them next to known aquatic animals like whales. Hundreds of years ago, sailors and people living in coastal towns around the world told stories of seeing mermaids. According to The Flying Dutchman and Other Folktales from the Netherlands by Theo Meder, there is a legend of a mermaid dating back to the 1600s. It is about a mermaid making her way into Holland through a dike. While injured, the mermaid was brought to a nearby lake to be nursed back to health. Eventually, she learned to speak Dutch, performed household chores and converted to Catholicism.

In Edward Snow’s book, Incredible Mysteries and Legends of the Sea, one true story describes a fisherman from Newfoundland that had a brief encounter with a mermaid in 1614. According to him, the mermaid had large eyes, a finely shaped nose that was somewhat short, and well-formed ears which were somewhat too long. This interesting combination was definitely appealing until he realized that the green hair he originally noticed was actually a part of her tail and was only a woman from the waist up. In the 1949 painting The Collective Invention, surrealist painter Rene Magritte portrays a reverse mermaid.

The siren, also known as a mermaid, has been a part of folklore for over 3000 years. Many people first became aware of them through Greek mythology. Did you know that our modern idea of what sirens actually look like is based on a man named Hans Baldung Grien? His illustration was likely one from a series he completed known as Les Demoiselles des Rues, in which he depicted images inspired by women he saw on the streets during his travels throughout Europe. This image, however, didn’t become widely accepted until much later when it was used in an opera called Ulysses by Jacques Offenbach. Sirens have existed in some form since ancient times. While they’ve been portrayed differently throughout history, they are almost always creatures that are particularly dangerous to human men.

This article includes a table that lays out the differences between sirens and mermaids.

Biologist Sir Alister Hardy offered a new explanation for human evolution in 1960 by proposing the concept of aquatic humanoids. This theory holds that our hairless skin, large brains, and a small layer of fat (which marine mammals possess) point to our descent from humanoids that inhabited oceanic areas rather than a descent from jungle apes. People suggested that humanity found a food source in the water instead of the land. As time went on, humans evolved to live in the water. This made it easy to believe in mermaids, according to Ohio State University. Hardy’s theory remains largely controversial and without sufficient evidence. Based on most archaeological evidence, human evolution is more likely to have occurred on land rather than in the water.

Mermaids were typically described as amphibious women with scaly fish tails instead of legs. Some legends even said they had long bird beaks or tails and would lure men to their deaths with seductive songs. Other myths say they were dangerous harpies that destroyed ships and killed sailors. One ancient Greek myth says that Zeus created Aphrodite (the goddess of love) from sea foam and gave her a beautiful voice so she could serenade sailors and make them crash into rocks. He also created three other female sea gods called sirens, who would lure men to their death with hypnotic voices. Eventually, these evil creatures became known as mermaids in popular culture.

Several hoaxers created fake mermaids for the 1800s public. In the 1840s, the showman P.T. Barnum displayed the Feejee Mermaid, and it became one of his most popular attractions. Rather than a sighting of a beautiful mermaid combing her hair, the viewers who had paid 50 cents saw a macabre, ill-shaped body several feet long. It had the body of a monkey and the tail of a fish. To a modern eye, it was obviously fake, but in its time, it tricked and mystified a lot of people.

Modern mermaid sightings are relatively uncommon. A 2009 news report claimed that a mermaid had been sighted off the coast of Israel in the town of Kiryat Yam. They would usually put on a few tricks for people who were out late in the evening, then disappear into the ocean for the night. One of the first people to see the mermaid was Shlomo Cohen. He said, “I was with friends when suddenly we saw a woman laying on the sand in a weird way. At first, I thought she was just another sunbather, but when we approached, she jumped into the water and disappeared. We were all in shock because we saw she had a tail.” The town’s tourism board was delighted with their newfound fame and offered a $1 million reward for the first person to photograph the creature. Unfortunately, reports about this phenomenon came and went before anyone was able to verify the rumor and claim the prize.

The television program “Mermaids: The Body Found” rekindled interest in mermaids by sharing the tale of scientists discovering proof of real mermaids deep in the ocean. It was made to look like a documentary. The show was so convincing that NOAA, The National Oceanic, and Atmospheric Administration released a statement denying the existence of mermaids.

A fisherman on TikTok records the sounds of what he believes are mermaids that follow him when he is at sea and even at the docks. His next video shows a government lab being set up on his work boat. His account is full of call and response videos between him and something singing out to him from the sea. Let us know if you think it is a hoax or a mermaid.