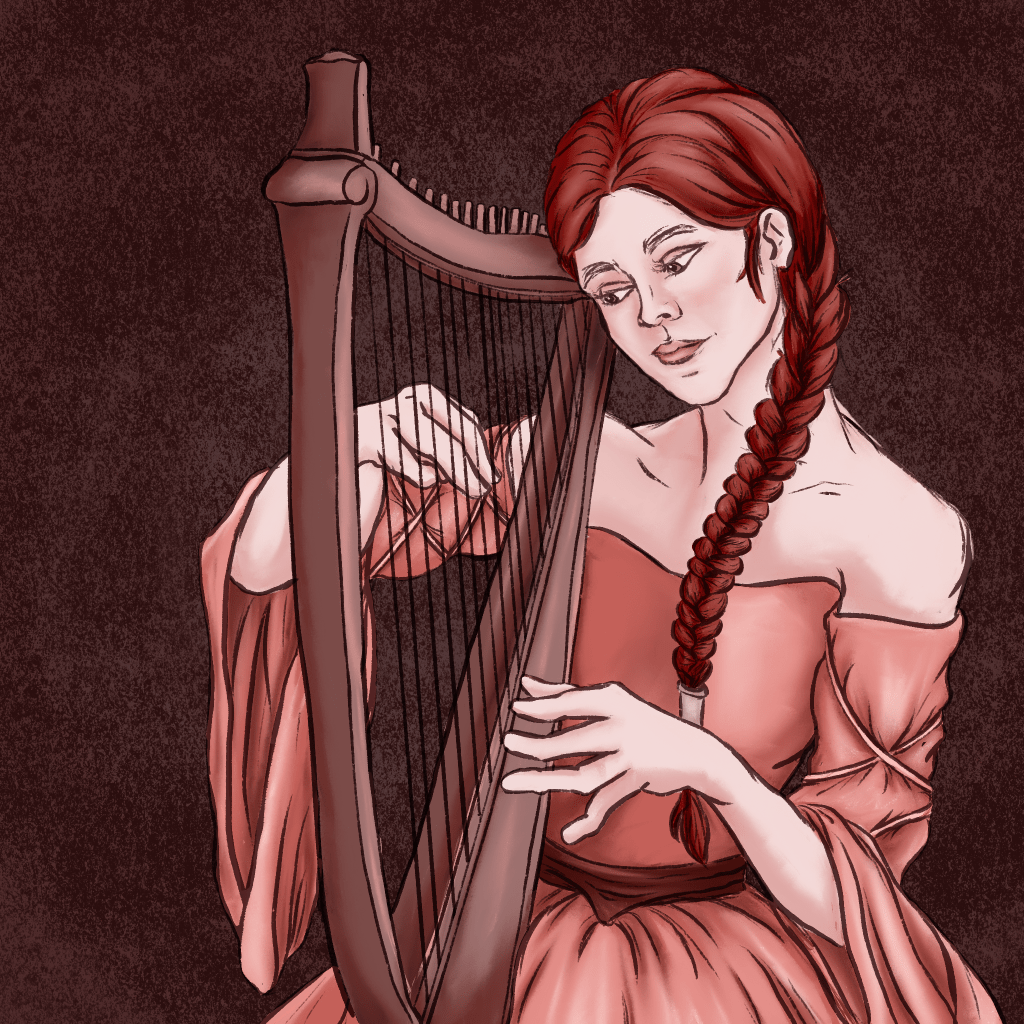 Cana Cludhmor (also known as Canola), was a Celtic Goddess of Inspiration and Creativity and inventor of the harp (Lyre), Irelands long-loved symbol and the core of traditional Irish music. Her story begins with something trivial: a lovers quarrel.

As mythology tells it, one fine day, Canola had an argument with her lover, Machuel.  Although she was a goddess, as an intermediary between our physical world and the infinite Source of All, she felt emotions just like mortal humans. So, like any mortal woman whos had a falling-out with her man, Canola was a little…vexed. And the best way to deal with strong emotions was to get some air, so Canola went out for a late-night walk to clear her head.

She decided to walk along the seashore, hoping to calm down and feel the peace and beauty of nature.  Suddenly, she heard beautiful, haunting music drifting over to her in the wind. It was so enchanting and compelling that she completely forgot her anger and sat down to listen more intently to the melody. She was lulled into a deep sleep as the music continued to wash over her, calming her soul.

Upon awakening in the light of morning, the music was still floating along, and she just had to find where it was coming from. After searching for some time she found its origin and it was quite a surprise. The music was emanating from the carcass of a giant whale laying on the beach. The wind was gently strumming the notes across dried sinews still attached to the rib-bones of the whale. Even in the death of a beautiful creature, Mother Nature made something alive and beautiful. What a gift!

While sleeping, Canolas mind, stroked by the wonderful notes, was full of marvellous dreams. Upon witnessing the unique gift offered to her by Mother Goddess, inspiration struck Canola and she was moved to try and recreate this wondrous, natural resonance.  Canola, filled with creative intelligence, forged the harp (Lyre), Irelands national emblem to this day.

The harp is believed to symbolize the immortality of the soul and the eternal circle of life. Dane Rudhyar, in a 1922 lecture in New York City, said that the original, primeval harp was shaped like a bow or a half-circle. He also adds that the circle represents the unmanifest (the spirit world) while the half-circle represents the manifest (the physical world). These two shapes help us understand the eternal cycle of life.

Canola created the Irish harp, a unique, exquisite instrument that captures the haunting melodies of the universe, inspired by the perfect dance of nature. The harp, the Irish Goddess gift to the people of Ireland, continues to depict the eternal nature of life.

Canola is known as the patron Goddess of musicians and bards. Call on Canola for inspiration in your creative endeavours and look to her while practicing dreamwork and magic. She reminds us that the universe is made up of vibration and frequency and that we are all cosmic beings in this great journey of life, death and rebirth.