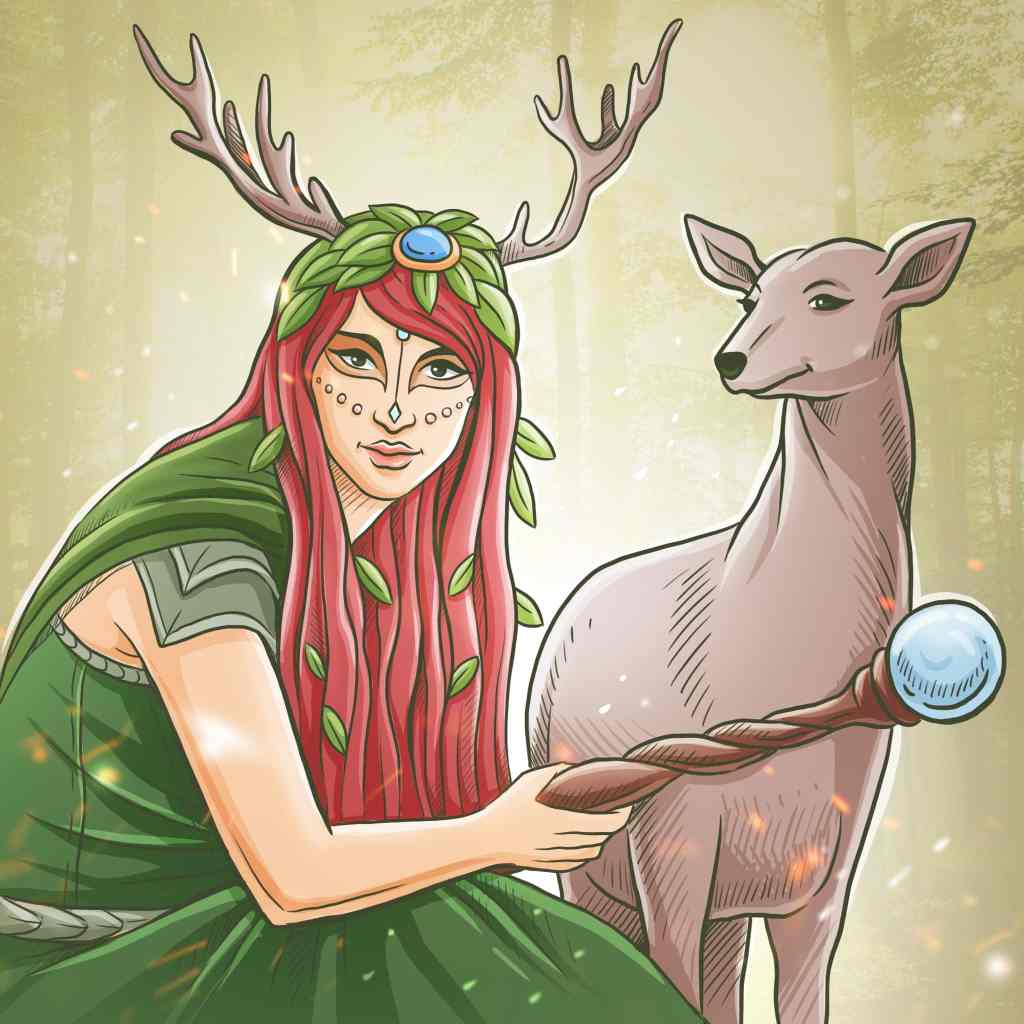 Elen from the Celtic world is a goddess known for her connection to nature, she is an aspect of Mother Nature. She has been called the Lady of the Wildwood, Elen of the Ways, the Green Lady, Deer Mother, the Old Mother, the Spirit of the Herd, and the Horned Goddess. She is many things to many people, with her power residing in her deep connection to the natural world and to physical and spiritual roads or paths. Pathways and trackways are places of travel and transition. Elen’s guidance will assist you both spiritually and physically.

She is a goddess of wild places, especially the Celtic moorlands, the woods, and the heathlands. Seeking her out required going to these wild places and looking for her in every aspect of the wild lands. Elen is in the mist in the air and in the heartbeat of a tree. The deity was also a physical goddess who had antlers. She entices people to travel deeper into wild spaces to experience the spirit of nature for themselves.

Elen took delight in her state of freedom, often dancing in a wild and free way. She was often pictured as a goddess with pale skin, green eyes, and long, red hair. Often, her hair is pictured entangled with leaves and twigs to represent her wild nature.

Elen of the Ways

She is a guardian and secret keeper of the ways. She walks the pathways and leaves a little of her energy there, so others are enticed to travel them. There are mysteries deep in natural spaces, and she is at the heart of many of them. As a deity, Elen is wild and running naked through nature with the joy of freedom. She is strong, wise, and graceful.

The Horned Goddess is pictured with antlers. Female reindeer have antlers. It was Elen who led reindeer onto pathways and helped them to get to the Celtic world. She opened pathways so that the deer, highly important in the Celtic world, could move into and through the forests of Britain.

A Goddess of Sovereignty

There are many types of sovereignty, including the power of the leaders of societies such as kings and presidents. Sovereigns lead as part of a personification of a larger concept than themselves, such as a country or region. Elen is a goddess of sovereignty who also personifies a concept, hers being nature. She was a guardian of the Celtic lands as well as the people who lived in them. She also represented the spirit of the people who worshiped her and the spirit of all who lived in her lands. A human sovereign can always be replaced, but Elen is an eternal sovereign who helps the land to be healthy and flourishing with life.

Cultures around the world have personified nature as a female, and the Celtic world was no different. It had Mother Earth, which Elen was not. She was instead a goddess who was intimately tied to nature. The Celtic world was acutely aware of male and female energies, and they believed that Elen and other nature goddesses saw their best results when they worked with male energies. While the human sovereign was a king with male energy, the land itself had female energy – Elen. The goddess and the king worked together to help the land and all of the inhabitants thrive.

The Green Lady is a female counterpart to the Green Man, a nature god of the Celts. He was the personification of nature gods and of nature itself. Though the Green Lady isn’t as well-known today, she was a strong presence among the Celts. Living in the midst of nature was the norm for them, and they needed the help of Elen while on pathways and out in the wild. There is often a need for action to be taken to get rid of the old and replace it with something fertile and ready for growth. Elen fulfilled this function in the ancient world for the Celtic people.