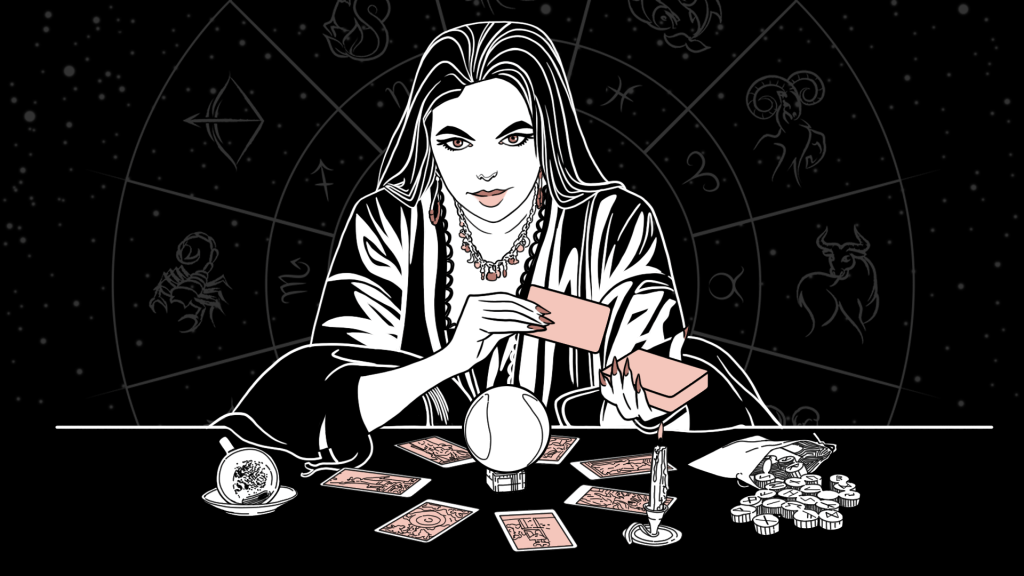 From the most ancient of times humans have tried to know what will happen in the future or is happening far away or even what has happened in the past. Some methods of divination are used to draw insight into the current situation the questioner is facing. I have listed a few of the better-known divination magics at the end of the article. Today we will focus on taromancy, rune casting and tasseomancy and astrology/numerology.

Rune casting – Runes are consulted for guidance in particular situation. Runes are usually carved in stone, wood, or crystals and stored in a pouch called a rune pouch. The oldest set of runes are the Elder Futhark dating back to 400 AD. The Younger Futhark are from the Viking Times in 700 AD.

Each rune has varied meanings. The meanings are interpreted by the runes positions in relation to each other. Some people used reverse meanings, and others do not. The readings are often done in three rune spreads representing problem, solution, outcome or past, present, future. However, the runes are read as an overall influence in the big picture. Some people use a blank rune, but some deeply oppose this. This was only introduced in the 1980s and is considered new age.

The best way to read tarot is said to be getting to know your cards more than just meanings but on a personal level. The readings are often done in a three-card spread and the Celtic Cross Spread. Tarot decks often come with instructions on basic spreads and meanings. Tarot cards can take on personal meanings to the reader. There are also videos, books and even courses offered at pagan festivals to learn.

Tasseomancy – The practice of reading tea leaves is represented mystically in media. The practice originated in the Baltic and Slavic regions and among the Romani people. The Romani people spread the practice across medieval Europe. It was common to find fortune tellers who would offer these services.

The reader would brew tea with loose tea leaves and have the questioner drink the tea while concentrating on their question. The cup would be swirled three times to the left and then flipped upside down on a saucer and allowed to sit. Various positions in the cup were said to represent different meanings. The reader would interpret the symbols she saw in the tea leaves. At one time specialized cups with clearly marked instructions were crafted by tea distributors.

Astrology The oldest and yet most contentious form of fortune telling, astrology originated in Babylon in 400 BC. Its widespread use was highly popularized in Egypt during the reign of the Ptolemaic Kings after the true pharaohs ruled. This was at the birth of the Roman Empire.

Astronomical bodies are said to have profound influence on human affairs and occurrences. The position of the heavenly bodies at the time of ones birth are used to create a complex chart to give them great insight into themselves and their lives. Some people rely on a daily or weekly horoscope while others do so simply for fun. Most people know their Sun sign, fewer their Moon or Ascendant signs but these are also important influences in the life of every person.

Of course, there are people do not believe in any forms of divination. For them these are games and fun. For others they are deeply serious. One thing to remember as you delve into the world of divination is that the runes, cards, symbol, or stars ae telling you of how things will occur if circumstance sand behaviors continue as they are moving forward. A dramatic change can alter these events.

Aruspicina – by ritualistic slaughtering of an animal and studying the entrails

Capnomancy – by smoke from burning incense