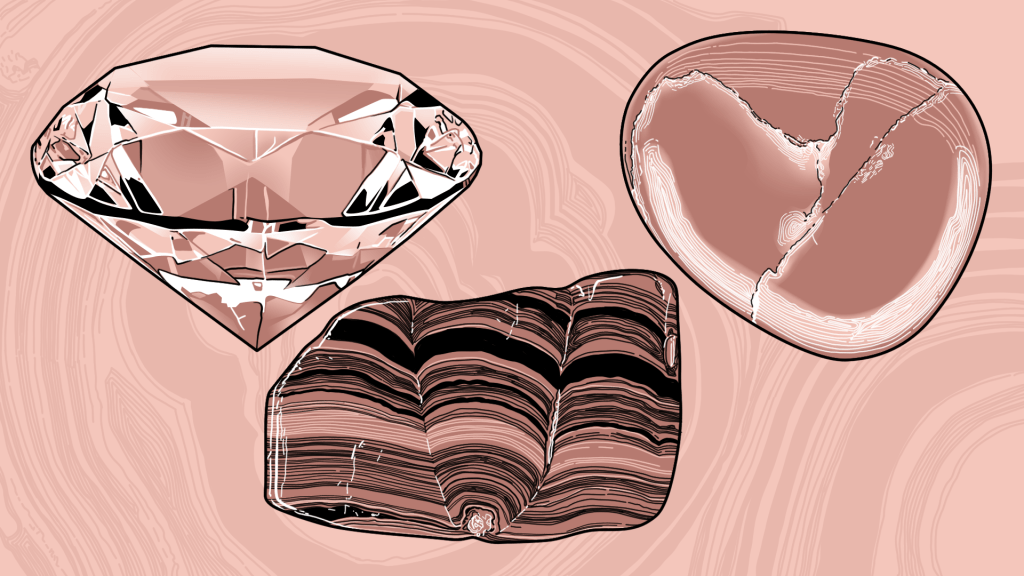 In ancient India diamond was used in rituals or ceremonies for victory.  In ancient Rome diamonds were placed in steel bands worn by soldiers for bravery and victory. When Europeans discovered diamonds they were found being used by African tribal shamans. They may have been using them as we use modern day quartz. Originally, they were worn as polished stones, prized for their beauty, until it was found to produce such brilliant facets under pressure.

Today diamonds are very expensive as diamond cartels strictly control the supply from mines in Africa and around the world. Diamonds promote spirituality and were used by shamans to achieve spiritual ecstasy. Diamonds are also worn for confidence with the opposite sex. It is in fact known to relive sexual blockages and conquering infertility as well as ensuring fidelity. The diamond is cleansing and purifying in this regard. It can even help lovers to reconcile.  Diamonds are one f the strongest materials on earth and is used for protection. Diamond can also help promote peaceful sleep, relieving nightmares.

Malachite is known to provide extra power in ritual and spells. It also can be placed in a childs room to aid in growth and development. It can also help protect children from negativity. Its also known to attract love by unblocking the heart chakra. It can also be used to soothe and relax, dispelling depression and calming stormy emotions.

Jade was used to craft different instruments used in ancient Chinese and African rituals and ceremonies. It was considered sacred in China, used to craft altars of Moon and Earth and figures and statues of deities.  They were also included in graves as gifts to ensure vitality to the deceased.  They were also exchanged as tokens of friendship. In New Zealand the M?ori would carve their ancestors in Nephrite (very similar to jade) and set them with eyes made of mother-of-pearl.

Jade is a stone used to control the weather and forcefully casting the stone into a body pf water can cause storms. It is said that one should wear jade while gardening or they can be buried along the gardens perimeter to ensure a bountiful and healthy garden. Jade amulets were worn to attract both money and love. Was also said to guard the wearer against accidents.  It is used in defensive magic. Wisdom can be gained by placing a piece of jade on the third eye. Jade is also used for healing kidney, heart, and stomach problems.