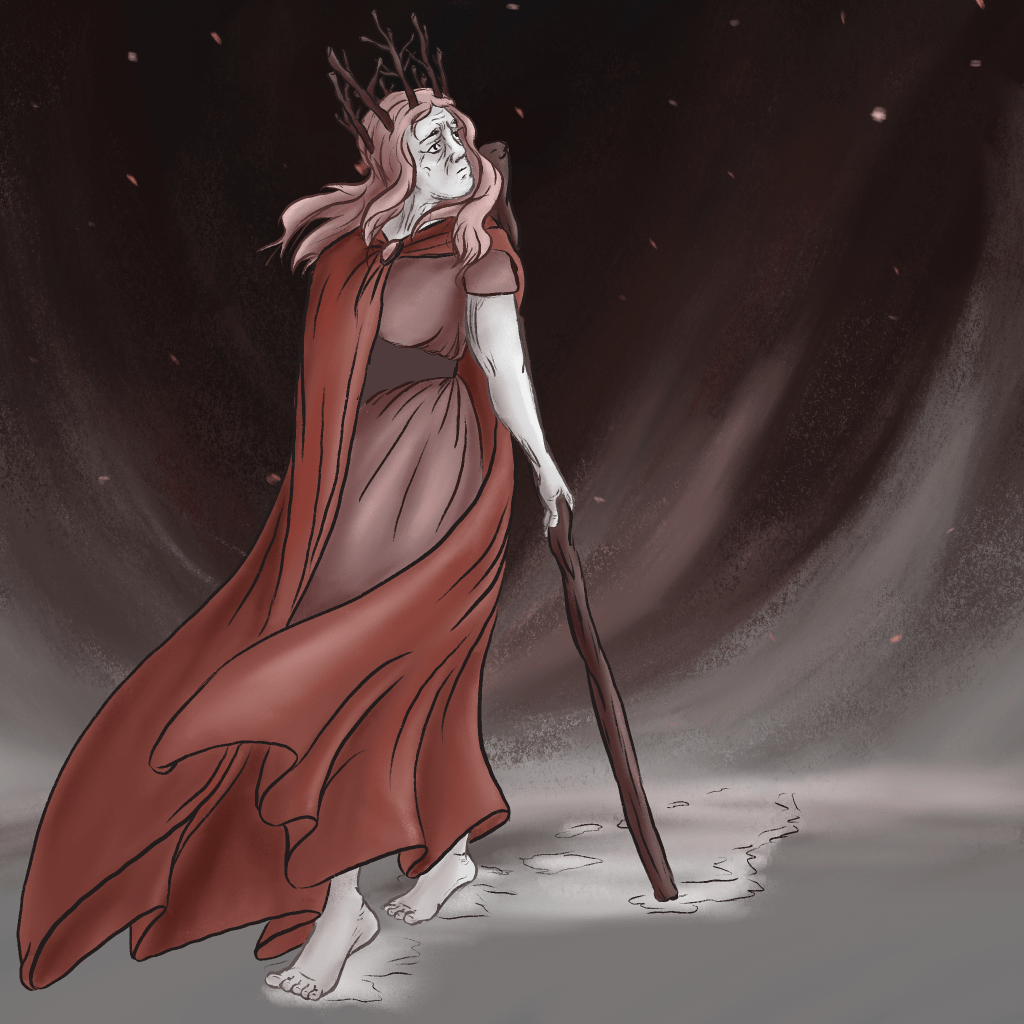 Cailleach Bheur, or Blue Hag in Scottish Gaelic, is the Irish goddess of winter, represented as an old hag with blue wrinkled skin who carries a hammer, distaff, and spindle. When her distaff touches the ground it turns into a pool of water which freezes over, making pools of ice on the ground that are able to break bones if stepped on without care. Legend has it that Cailleach Bheur lives on Ben Buie in the Highlands of Scotland, where she guards treasures buried at the bottom of Loch Ness.

Who is Cailleach Bheur?
Cailleach Bheur, also known as Cailleach Beara, is an ancient deity who presides over winter and chaos. She is depicted as an old hag, often accompanied by a large dog or several hunting dogs. If you ever come across her in your travels you must always be careful to show respect for her great age and power, otherwise, she may unleash her hounds upon you! She has watched over Scotland since ancient times and still stalks through our land today. Keep yourself on her good side and remember not to cross paths with her if you wish to avoid terrible misfortune. Her story stretches back from modern times to when even time itself was born from fire. Thus, her incredible lifespan gives her insight into how things work in ways no one else can understand. It is said that she can see what is hidden from others eyes and hear what others cannot hear. Do not under any circumstances challenge her wisdom unless you have a death wish! Despite being possessed of great power, Cailleach Bheur holds no grudges against mortals and will only allow harm upon those that provoke her wrath out of ignorance or malice.

Symbols of Cailleach Bheur
Cailleach Bheur is a goddess associated with both winter and wisdom. Her symbols include a cows skull, a cauldron, and a spindle. She sometimes appears in human form with an iron staff or distaff in one hand and a fire in another. To pay homage to Cailleach Bheur, leave offerings of grain at her sacred sites. In return, she will bestow gifts to you, such as wool from your sheep or good health from your family! Do not visit Cailleach Bheur unless you are called to do so by your intuition. She can be quite fearsome if angered… And who could blame her? She rules over winter after all! Just remembercalmness, gentleness, and respect are always appropriate when dealing with Mother Nature.

It should go without saying that stories about historical events aren’t actually true history. Remember that history comes from two words meaning inquiry (Gk ???????) + the story of (L historia), which suggests that historians should seek out underlying causes for past events rather than taking them at face value without examination.

Stories featuring Cailleach Bheur
In Gaelic and Irish mythology, Cailleach Bheur is a deity associated with winter. She is referred to as The Old Woman and is believed to be benevolent. Its also believed that she collects water from clouds before they drop as snow or rain and that she can shapeshift into a crow. She has been depicted in folklore as both an ugly hag and a beautiful young womanand interestingly enough, depictions vary depending on where youre located. For example, she is sometimes portrayed as being alone, while in other stories she has children. Like many deities across cultures, her exact origins are unknown but legends suggest that she was created when God took some earth and made a woman out of it. Whatever her origin story may be though, one thing remains constant about Cailleach Bheur: wherever there is cold weather, you will likely find her there tookeeping watch over winter so it never gets out of hand.

Worshiping Celtic Deities
Cailleach Bheur (pronounced kal-yakh veer) is one of several goddesses in Irish and Scottish mythology. Shes associated with winter, death, and rebirth. Theres evidence that her worship existed prior to Christianity coming to these regions; she may be one of many pre-Christian deities who were incorporated into both Ireland and Scotlands newer religions. While we know Cailleach Bheur is a form of reincarnation of an older Celtic deity, her origins remain a mysteryas does her original name and any other title she may have had. Her legendary exploits include ordering harsh winters and preventing hunters from killing certain animals at certain times during their annual cycles.