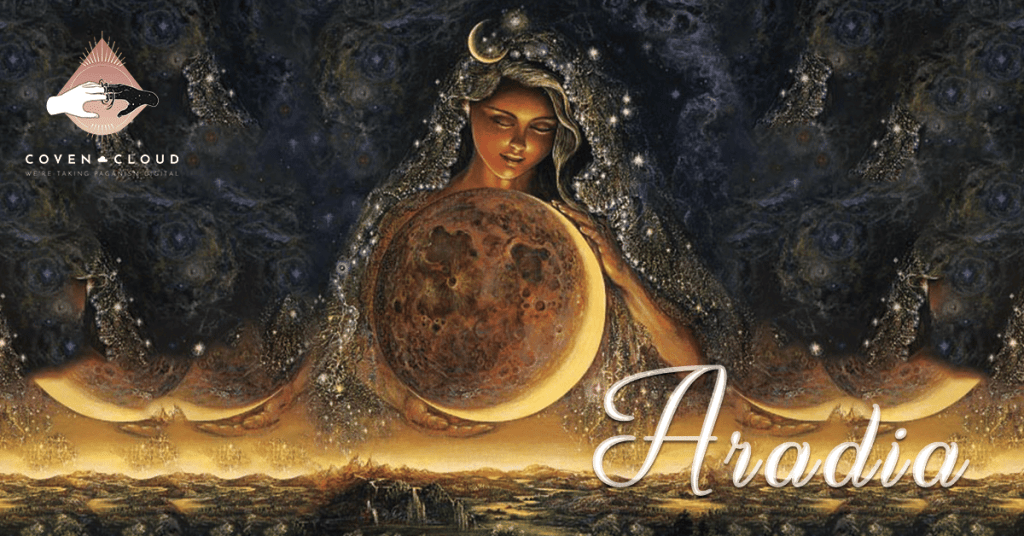 Aradia, Mother of Witches, is a name that most Wiccans, witches, and pagans become familiar with during their spiritual journey. Most know her from the 1899 book by Charles Godfrey Leland, Aradia, or the Gospel of the Witches. Aradia’s mystery and the legend continue to captivate the spiritual community even after a century.

Champion of the Witches

Aradia is frequently called the Witches’ Messiah. Writings say that she was a savior sent to Earth by the old gods to be a champion for their enslaved people. Her work was to liberate them from the Roman Catholic Church, the Italian upper classes, and their oppression. Although the Gospel portrays her as a Messiah, we can view her as a champion of all witches.

Because messiah can be a heavy term connecting to the idea that a single being needs and is the only thing that can save others, it can be beneficial to think of her more as a champion or voice for witches. Aradia is all about providing the strength to find your inner power and liberate yourself by following her example. Aradia empowers her people to find freedom and expression through the gifts of witchcraft, which is as relevant today as ever.

The Personality of the Goddess

Aradia leads the way in the fight for freedom and spiritual fulfillment. Her personality is showcased well in the Gospel, and readers see much about her nature. As a hero for oppressed people, Aradia stands up to injustice and encourages you to get out from under the thumb of those who push you down.

The Gospel depicts her as a feisty rebel who takes on the establishment. However, she’s also depicted as a woman of great empathy and compassion for those put down by others and who must renew their connection with their magic and inner power.

Aradia was a teacher in many ways. In the Gospel, she says, “When I shall have departed from this world whenever ye need anything, once in the month, and when the moon is full [. A]dore the mighty spirit of my mother, Diana [, ] and ye shall all be freed from slavery.”

Her goal was to help her witches find their way back to the Goddess. She was selfless and humble, looking only to inspire others to take back the reigns and forge their own path.

Leland’s Gospel isn’t the only place where we see Aradia and her association with the Goddess Diana mentioned. In the heinous 1486 CE Malleus Maleficarum (The Hammer of the Witches), a witch-hunting manual, the footnotes link Aradia, or Herodias, with the Italian witches’ cult of Diana.

Diana is described as the Goddess and Mistress of Witches in the text. When she cannot attend a ritual gathering, Herodias (Aradia) stands in her place as Witch-Queen. This Aradia by another name is seen in a text that predates Leland’s work by 413 years, showing a long-standing belief that another figure, perhaps one more human, would often be sent to help witches in need when the gods couldn’t make an appearance. Additionally, the famous canon Episcopi also describes a similar relationship between Diana and Aradia. It shows these two figures as central pieces to the witchcraft practices of the time. Scholars don’t have an exact publication date for this text, though others published as early as 906 CE mention the canon directly.

That means Aradia was recorded as a key component of religious witch gatherings in the cult of Diana, performing her role as Witch-Queen or teacher for about seven years shy of a millennia before Leland published his incredible Gospel, and she got the world’s attention once again.

The number 13 is significant to witches, and several scholars claimed that Aradia had 13 powers. It comes from a reference to Leland’s Aradia. However, it’s not what the text states. Aradia is a universal goddess you can call upon to help fulfill your magical desires.

The Gospel offers thirteen instances of Aradia’s magic to the reader that showcase her wide array of abilities. However, these are only examples and don’t claim to be a list of all her gifts. The Gospel makes it clear these are only a few of the many things she is capable of.

When working with Aradia, remember this and don’t seek to limit or reign in her sphere of influence. She is a witches’ Goddess. And similar to how a witch can work in several aspects of the Craft, such a goddess would be capable of exerting her powerful presence in many different spheres, even simultaneously.

The Charge of Benevento

The Charge of the Goddess, a well-known, much-loved piece written by the late Doreen Valiente, was influenced by a number of much older source texts. One of the most significant is Leland’s Aradia, which you can see directly influenced the lines at the text’s beginning. The original “charge” from the Gospel, spoken by Aradia to the witches, includes strong references to workings timed with the full moon and emphasizes community.

Within this declaration, Aradia says to her people that they should play the “game of Benevento.” Scholars believe Benevento was a very important meeting site for Italian witches, and references about it became more popular in 1273. At the site, which centered around a sacred walnut tree, the witches would gather to perform their rites and spells. The infamous witch trials of 1428 strengthen the Benevento associations within Italian culture.

Admitting such events took place, a particular witch told a story about a special ointment or balm that she rubbed onto the armpits and breasts to induce an out-of-body experience that gave them a chance to fly to Benevento to celebrate spiritually. People most frequently attribute the activation of this ointment to this spell:

Carry me to the walnut tree of Benevento,

Above the water and above the wind,

And above all other bad weather.”

In some instances, witches claimed their spirit rode on a broomstick after performing the spell, showing how deeply rooted these cultural images are and how they became a part of the global consciousness surrounding witches.

Aradia’s strength and fortitude are something we can all learn from, and as the adage states: “If you want to know where you are going, you need to know where you have been,” studying our history, the history of this powerful witch Goddess and counterpart of Diana, can strengthen our practice.

The words “Know thyself” scrawled at the Temple of Delphi also support this historical research and connection. The Gospel significantly influenced the global Craft development revival, and it seems right to conclude the best way to “know thyself” is to consider our legends and myths deeply.

Reading the Gospel by Leland and the newer book Aradia: A Modern Guide to Charles Godfrey Leland’s Gospel of the Witches can help you to learn how to incorporate the old teaching into your modern practice. Aradia is a powerful mother figure and goddess of witches. Call upon her throughout your spiritual development and embrace her teachings to fight for freedom and joyful expression.

Aradia, we welcome you into the future!