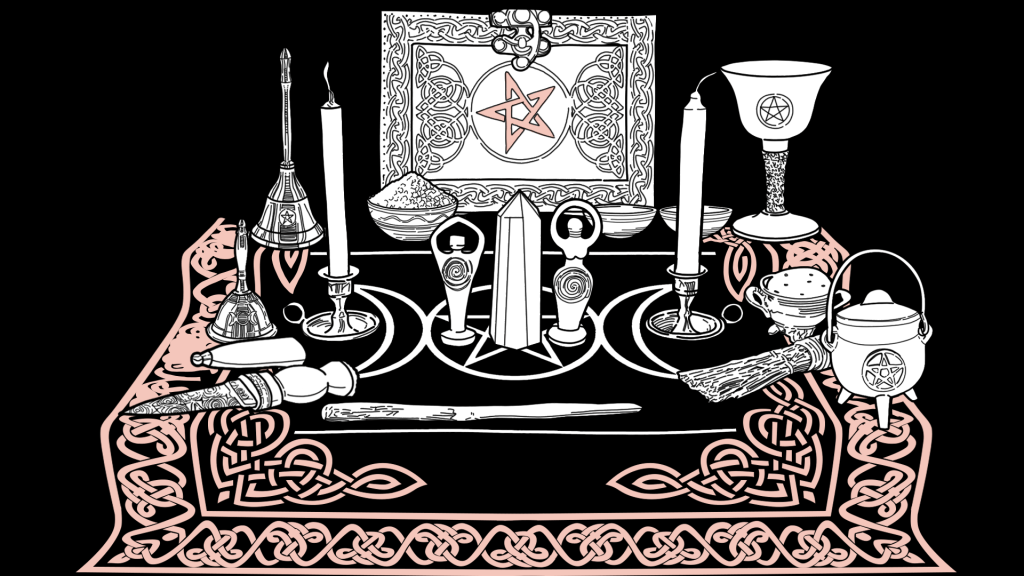 Almost all religion has tools involved in performing its rituals.  Some have idols or holy relics. These are symbols of power that believers harness to direct their energies in effecting a change. Praying with a Catholic Saints Candle is just as holy to a practitioner of that faith as a Sacred Circle is for witches.  In fact, to enforce that these tools are just symbols, my first mentor forbade me from using all but the most basic tools at first.  Until he felt I could fully perform without them, visualizing the tools, I had only elemental representations.

Below is s list of the most common tools on a Wiccan altar and brief descriptions.  This is not an exhaustive list nor are any of these required.

Earth (North) a bowl of salt or sand

Goddess Image/Candle– some people have both a candle (white and silver) to represent the Goddess as well as a small statue to represent Her as well. Either is appropriate.

God Image/Candle – some people have both a candle (white and gold) to represent the God as well as a small statue to represent Him as well. Either is appropriate.

Athame A ritual dagger, the athame is rarely sharp and is (in most traditions) never used to cut any real-world objects. It is both an astral projection device as well as a representation of the God in conjunction with the chalice. Many witches salute the deities and/or the elements with their athame.

Chalice The chalice is the ritual goblet. Wine or a suitable substitute is placed in the goblet. This is often consumed during the cakes and wine portion of the ritual. It also represents the Goddess in unison with the athame. Many witches use fruit juice as opposed to wine.

Wand– Though once made primarily of wood, wands can be of any material.  They are a focus to direct energy in your workings.  A wand is often thought to represent male vitality and divinity. A wand is often used to draw symbols and runes in the air or in the earth.

Cauldron A cauldron is another item representing the Goddess in her mother aspect. They are used for a great many things such as burnt offerings, herbal blends, or filled with water to make moon water or to scry. Some witches use them exclusively symbolically.

Bells these can be very simple bells or elaborate strings or even gongs.  Bells are rung often to begin and end a rite or to call the elements and spirits but can also be used to cleanse a sacred space.  The vibrations of the ringing are said to raise the vibrations in the air around you.

Pentacle Many Wiccan altars feature a pentacle which is engraved with the five-pointed star (also called the pentagram) representing all four elements and Spirit as the fifth point. Often offering or objects you intend to consecrate can be placed on the pentacle.

Crystals These are up to you, entirely. They not only can offer a very nice aesthetic touch to your altar, but they can also literally be placed in ways to honor the elements or deities.  I often place mine to catch my eye and draw me over to my altar more often.  Make sure you use your favorites, the ones you feel most attuned to.

Book of Shadows This is magical record keeping.  Witches use their BoS for all manner of things. Some keep one digitally, some by hand, some in spiral notebooks, some in bound tomes.  There is no right or wrong way and you can record whatever rituals, spells, and experiences you have on your journey with the Craft.

There are a great many other tools that witches use both in a Wiccan tradition and other pagan traditions. As I said this was very brief overview of some of the most common.  Besoms, booms, swords, and staffs are just a few.  Again, do what feels right.