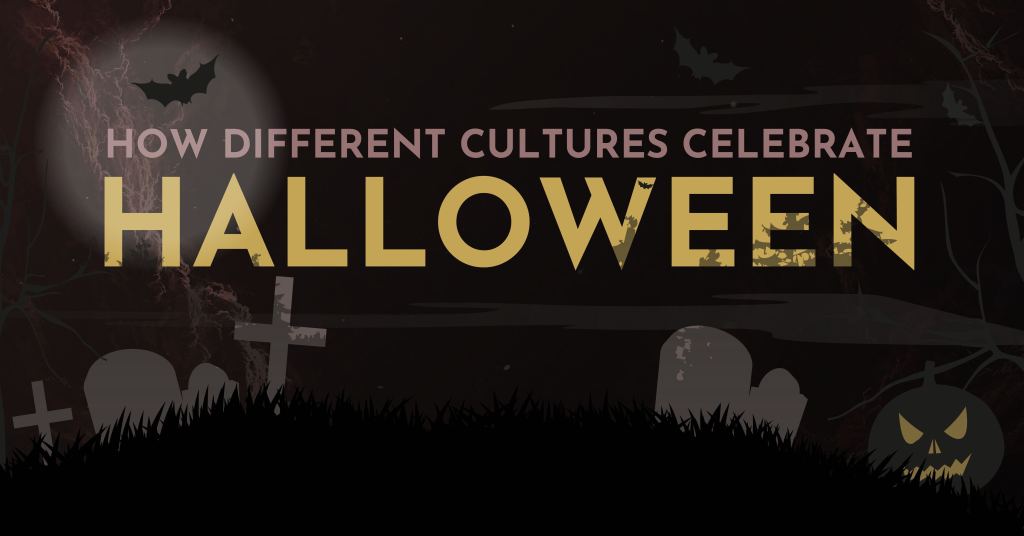 Halloween can be an exciting time of year, but it’s important to remember that it’s not just an American holiday. People all over the world celebrate Halloween in different ways and with varying degrees of intensity—from those who decorate pumpkins and dress up as ghosts to the Mexican Day of the Dead (Día de Muertos) to those who don’t consider it any more significant than any other night of the year. Here are some fun facts about how different cultures around the world celebrate Halloween

In Europe, people used to celebrate a holiday called Samhain. It was a time to honor the dead and prepare for the winter. People would light bonfires and dress up in costumes to ward off evil spirits. Today, people in Europe still celebrate Halloween, but it’s more of a fun holiday than a religious one. People dress up in costumes, go to parties, and eat candy.

The Celtic religion observed an autumnal festival called Samhain that marked the end of summer and beginning of winter on November 1 or 2nd with various customs including prayers for protection against disease; animals were slaughtered for meat with festivals lasting until nightfall before being accompanied by crowds as they moved through village streets or over boundaries into fields at which point food was shared with outsiders after games and activities took place outside that sometimes lasted all night.

The term Halloween was coined in Ireland and refers to an evening of ritual and merrymaking. In pagan times, people believed that on October 31, spirits would visit Earth from a place called The Otherworld. The thinning of the veil between worlds allowed for communication with these spirits. At Samhain, many people held bonfires and made sacrifices to appease or ask for favors from supernatural beings. The spirits would give out blessings or curses depending on whether they were pleased or displeased with offerings made at their altars.

The Gaelic festival Samhain celebrated summer’s end and winter’s beginning. The season gave people time to prepare for winter and to store food. Crops could be harvested and animals slaughtered before a long, harsh winter set in. It was believed that ghosts of ancestors returned to Earth on Samhain, so offerings were made at cemeteries to ensure safe passage into heaven. Families also ensured their homes were stocked with plenty of food to withstand a long winter without going hungry. People decorated graves with candles or apples as offerings, while bonfires were lit in communities’ centers.

Santo Calende (Saint Nicholas) is honored on December 6th in Italy, and this event includes lighting bonfires to guide lost souls home and preparing cemeteries for winter by adding straw to gravesites and hanging wine-filled oranges from trees near graveyards.

The week before All Saints Day is a time for children to dress up as their favorite saints and parade around. Children also receive small gifts, such as candy and flowers, from adults, in exchange for small pranks played on unsuspecting adults, who usually buy treats for the kids later in return.

Halloween in The UK

In the United Kingdom, Halloween is celebrated on October 31st. The holiday has its roots in the Celtic festival of Samhain, which was a time to celebrate the end of the harvest season and the beginning of winter. Today, people in the UK celebrate Halloween by dressing up in costumes, going to parties, and carving pumpkins into jack-o-lanterns. Trick-or-treating is also popular, especially among children.

In Russia, it’s tradition to set small pies filled with candy out at night in honor of Grandfather Frost (Ded Moroz). The next morning they are given to children while listening to scary stories.

In Romania, it’s customary to light a candle and place a bowl of water next to it. When you go to bed that night, you are supposed to blow out your candle and make a wish. The next morning, if your wish came true, there will be two candles in its place. If not—well, let’s just say that vampires aren’t actually real. Sorry to disappoint!

In Poland, it’s also customary to leave small pies outside as an offering to Little Frost (Mikołaj). Depending on if they are empty or full, they are either left out for him or taken away by him. It is also customary to leave a trail of bread crumbs from your house to your neighbor’s so that children can follow them to receive treats from neighbors. And speaking of treats… it’s not uncommon for adults in Poland and Ukraine alike to sample Halloween candy before children get their hands on it—so definitely don’t let grandma give you chocolate until she has checked her stash first!

In Germany and Austria, people celebrate Halloween by putting up ghastly decorations and carving pumpkins into lanterns. On the night of October 31st, children dress up in costumes and go door to door asking for candy. If the homeowners are not home, the children will leave a note with their name and address so that the homeowner can send them a treat. In some parts of Germany, a bonfire is lit on Halloween night to keep away evil spirits.

In Japan, the Obon festival is held annually to honor the spirits of one’s ancestors. Families clean their homes and visit the graves of their loved ones, leaving food and flowers as offerings. Lanterns are also lit to help guide the spirits back home. The festival culminates with a huge bonfire, where people jump over the flames to ensure a good harvest in the coming year.

There are also a number of ghost stories that take place around obon time, and these types of tales usually revolve around a female spirit named Yuki Onna. She is characterized as being beautiful but also extremely cruel. One story tells of how she kept her husband in her house for six years because he never agreed to marry her. Eventually, however, he became tired of life with her and hung himself from a tree; Yuki caught him when she went out to bring in his laundry.

The Japanese word Obon means to honor the spirits of one’s ancestors. Families celebrate Obon during the summer by visiting Buddhist temples to pray for departed relatives, make offerings to them, and tell stories about them. Houses are decorated with flowers, candles, and lanterns to welcome back spirits from hell so that they may be reunited with their families.

In India, the festival of lights, Diwali, is celebrated around the same time as Halloween. The five-day festival honors Lakshmi, the goddess of wealth and prosperity. Families clean their homes and decorate them with clay lamps called diyas. On the night of Diwali, people dress up in their finest clothes and exchange gifts with loved ones. Fireworks are set off to ward off evil spirits. Delicious sweets are eaten and shared with friends and family.

In Korea and China, the celebration is called Teng Chieh and is observed on the fifteenth day of the seventh month in the lunar calendar. Families place food and water on tables outside their homes to appease the ghosts of their ancestors. Lanterns are also lit to help guide the spirits back to the other world. In China, people also visit the graves of their ancestors, tidy them up, and burn paper money so that their loved ones will have plenty in the afterlife.

In Hong Kong, the festival of the Hungry Ghosts is celebrated in the seventh month of the Chinese lunar calendar. On this day, people make offerings of food and incense to appease the spirits of the dead. It’s believed that during this time, the veil between our world and the spirit world is at its thinnest, making it easier for ghosts to roam. Families will also clean their homes and offer up prayers to ward off any unwanted visitors.

Halloween in the USA

Though the holiday’s roots are in pagan celebrations like Samhain, modern-day Halloween is celebrated all over the world. In the United States, trick-or-treating is a popular activity for kids on Halloween night. Adults often enjoy attending Halloween parties, where they can dress up in costumes and eat spooky snacks. Many people also decorate their homes with spooky decorations like ghosts, witches, and spiders.

The day before Halloween is called Mischief Night, and some kids play tricks on neighbors by egging houses or toilet papering trees.

In Canada, they celebrate Hallowe’en on October 31st. On this night, children dress up in costumes and go door-to-door trick-or-treating for candy. Adults often host parties or attend costume balls. The most popular colors associated with Hallowe’en are orange and black.

In some areas, trick-or-treating is discouraged due to reports of vandalism. In Montreal and other cities in Quebec, for example, Hallowe’en celebrations are more likely to be centered around school and family gatherings or community events. However, these events tend to focus on games such as bobbing for apples rather than candy collection. A similar event called Trick or Treat at Home occurs on October 31st in Newfoundland and Labrador. During these celebrations, parents host their own parties while children go door-to-door collecting candy with their friends under parental supervision.

Halloween in Latin America and Spain

In Latin America and Spain, Halloween is celebrated as the Day of the Dead, or El día de Los Muertos. This holiday is a time to remember and honor loved ones who have passed away. Families decorate altars with photos, flowers, and favorite foods and drinks of the deceased. They also hold lively celebrations with music and dancing. People often share their favorite memories of the person that has died.

In Mexico and many other countries in Central America, children dress up as santitos for Día de Los Muertos by wearing masks depicting skeletons.

Mexico and Brazil celebrate The Day of the Dead, which is a holiday to remember and honor those who have passed away. The holiday is celebrated with food, drink, music, and dancing. Families often visit cemeteries to clean the graves of their loved ones and decorate them with flowers. In Mexico, it is also common to see people wearing skeleton masks and costumes.

The Day of the Dead is not just a Mexican holiday, however. The holiday was celebrated by Aztecs before Spanish invaders came to Mexico in 1519. Today, people living in Peru, Spain, Chile, and other countries continue to celebrate it as well.

Brazil’s celebration of Halloween is known as Dia das Bruxas—Day of Witches—and takes place on May 13. On that day, children wear costumes and go door-to-door asking for treats while adults play tricks on each other and party until late at night.

Similar to Dia De Los Muertos in Latin America, many African cultures have times of the year where they celebrate those who have passed on. To learn more about traditions that are similar to Halloween, watch this video:

This is just a trip around the world in a blog post, but wouldn’t it be nice to plan an annual trip to far-off lands to experience the various versions of Halloween in different cultures? This could be an unforgettable new tradition for your Coven. If you or your Coven have already started doing this, let us know in the comments and share your experiences on the Coven Cloud social network.

Trick or Treat: A History of Halloween

Samhain: The Roots of Halloween

The Book of Hallowe’en