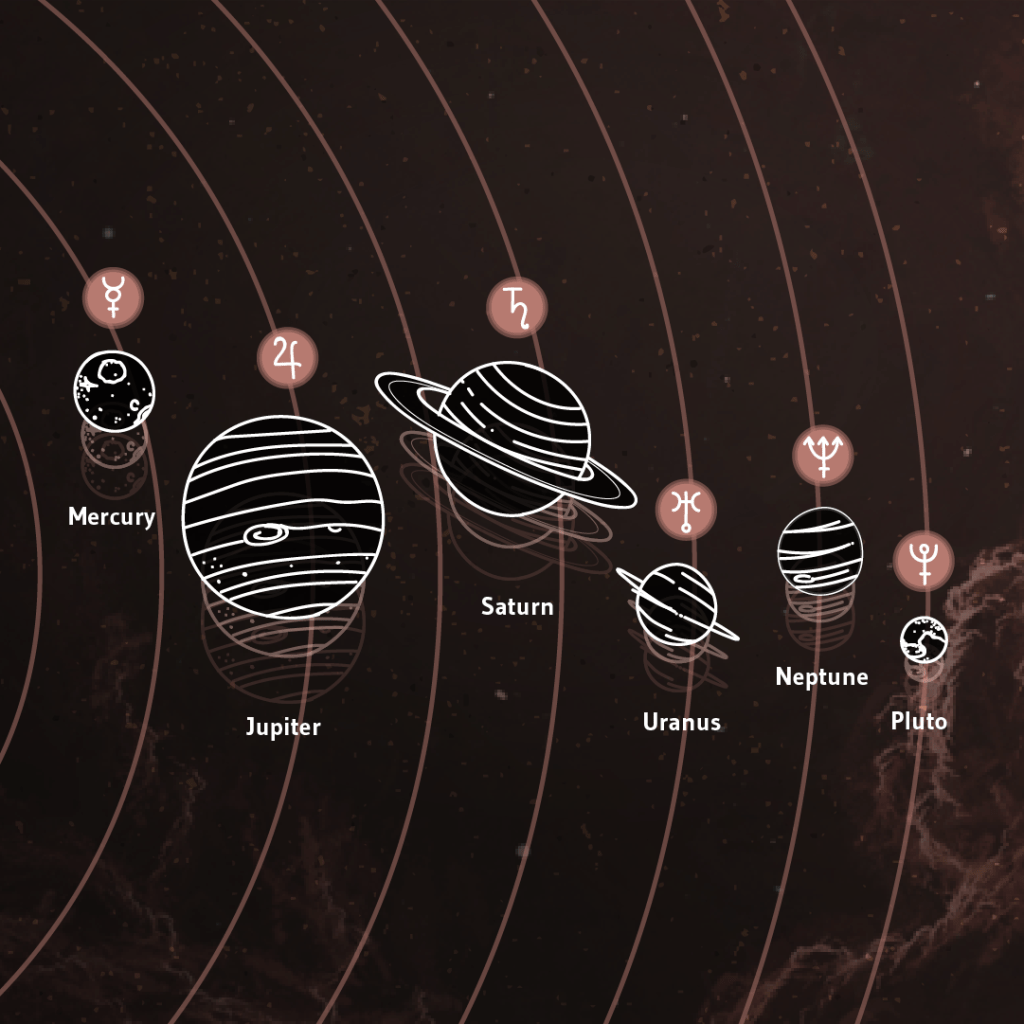 There are six planets in retrograde right now, and they’re all moving very slowly. What does that mean, and how can you get through this month without causing any catastrophes? Here’s what you need to know about the six planets in retrograde right now, Mercury, Jupiter, Saturn, Uranus, Neptune, and Pluto, and why it matters to you in your daily life.

1) Mercury
Mercury is probably not your concern. It’s almost always retrograde; it happens about three times a year (though to be clear, it doesn’t go backwardit just appears that way). If you follow astrology at all, you may know that retrograde is astrological slang for when an object (the Sun, Moon, or planets) appears to move backward in their orbits against Earthly perspectiveappearing like they are moving backward through time instead of forward. This effect only occurs when we observe them from Earth, though; it has nothing to do with the actual motion of any kind on their part.
Mercury retrograde starts on September 27 and concludes on October 18 in Libra. As always, Mercury’s retrograde will be a very intense time, as we are speculating upon all the partnerships, relationships, and attachments in our lives to understand where we belong. Is there balance and harmony amidst us? Do we feel at home with these souls? All these matters will be a theme of Mercury retrograde and finding better communication skills to represent ourselves and our most profound needs. As with all Mercury retrogrades come travel mishaps, communication issues, technological disruptions, the revival of old connections, the exposure of repressed emotions, and unforeseen problems that typically resolve when Mercury turns direct.

2) Jupiter
A time of high ideals, big plans, and lots of optimism, Jupiter retrogrades are generally great if you’re starting a business or have already launched one. As long as you know what to expect from Jupiter’s intense energy, you should be able to keep your feet on solid ground even though everything around may feel all turned around. It’s easy to get swept up in excitement about your success or start dreaming about future expansion too soon. Try focusing instead on being present with what you have at hand right nowthis is exactly what Jupiter will help you accomplish.
The lucky planet Jupiter is in retrograde from June 20 to October 18 in Aquarius. Although this transit is relatively harmless and doesn’t sway us on an extreme level, it is crucial to regard because the planet is not performing as it should. Rather than accepting other people’s views and beliefs, Jupiter retrograde will make us all a little bit more judgmental, critical, and demanding. It’s not that we won’t accept others, but we will be discerning about the vibes that we bring into our individual lives. Meaning, if we don’t like the stories they share with us, we won’t seek a relationship with them rather than just welcoming them into our lives (as we might have before).

3) Saturn
If you’re feeling like things aren’t going your way, there may be a reason: Saturn, the planet of limitation and responsibility, is retrograde. It can be a challenge to push past obstacles or take on new responsibilities. Before launching a new project or accepting a significant assignment, consider whether it’s worth jeopardizing what you have going now. It’s easy to forget about what we have if we feel called toward something new. It doesn’t mean you should abandon your ambitionsbut perhaps shifting them slightly so they don’t conflict with one another will help you move forward without quitting your current priorities.
From May 23 to October 10, the authoritative Saturn will be moonwalking in Aquarius. Contrary to widespread belief, Saturn retrograde is a beautiful time to make moves in relationships, as well as our professional aspirations. During this retrograde, we should decide what we want to give our alla decision based on the areas and connections that we feel will grow with us through time. It’s lovely if you’re going to let go of someone who isn’t aligning with your higher purpose since Saturn retrograde has a critical eye about who and what commitment looks like. Make sure that you’re aligning with the best people and circumstances.

4) Uranus
This planet, associated with spirituality, brings a desire to escape from reality. Do not make decisions about your career while Neptune is retrograde. Take a reality break from your job or work on a spiritual project, such as an art project or some volunteer activity where you help others. Your hard work will pay off when Neptune goes direct. You may be rewarded with an unexpected promotion or raise when it comes time to sign new contracts!
We can all expect shakeups, breakups, breakups, breakdowns, and breakthroughs during Uranus’ five-month backspin from August 19 to January 18, 2022. Since Uranus will be moonwalking in Taurus, all financial affairs and heart matters will take a trip on the astrological roller coaster. The same refers to professional possibilities. We’re revising the former story and reassessing our value. Consider this an opportunity to ask your boss for the raise you deserve or the prime seat in the office. Although the going may be tough and we may act out of character (even strange), we rethink our future goals. Money will be up and down, making it necessary to think about how we spend and save.

5) Neptune
Neptune is one of our closest celestial neighborsthe eighth planet out from our sun. However, the thing to remember about Neptune is that it’s not a planet at all. It’s what we call an ice giant, with makeup similar to Uranus, which sits on its other side in our solar system. A celestial body can’t technically be classified as a planet unless it has cleared its orbit of all other objects. Pluto’s demotion left us with eight actual planetsfor now.
From June 25 to December 1, the planet Neptune will be retrograde in Pisces. This back splash will make us all reflect upon our innermost thoughts and fantasies. Our intuition may not prove accurate but somewhat faulty, as we let our rational side conflict with our emotional nature. The caveat is that we may feel neurotic about situations and people (particularly new ones). Our fears will hold us back from emotional maturity. We may see people for who they are, which may oppose who we thought they were. Reality and truth will settle in. Therefore, personal and inner turbulence can result.

6) Pluto
Pluto is traveling back through Capricorn, his home base. This will mean that you’ll be looking into your past to see what’s still there that needs to be cleared away. Maybe it’s an old grudge or some unfinished business, but whatever it is, it’s time to deal with it now, once and for all. If you don’t, Pluto will keep pushing you until you do!
The always transformative Pluto is moonwalking from April 27 to October 6 in Capricorn. This transition will allow us to heal and grow simultaneously. Pluto is a planet that lets us see the areas in our lives that need to change, which is why the retrograde will be an extended time that gives us the strength to start afresh. The healing begins when we acknowledge our shadow selves and dig deep into the psychological depths of our souls and spirits. Diving deep will allow us to take note of everything that we must release to create the life we want.

The key to handling these retrogrades is to face what you’ve been running from. There is excellent power hidden beneath our shadows, but only if we are willing to dig deep. This time will show us that everything that happensboth good and badcan be used as a stepping stone to move forward on our path of self-love