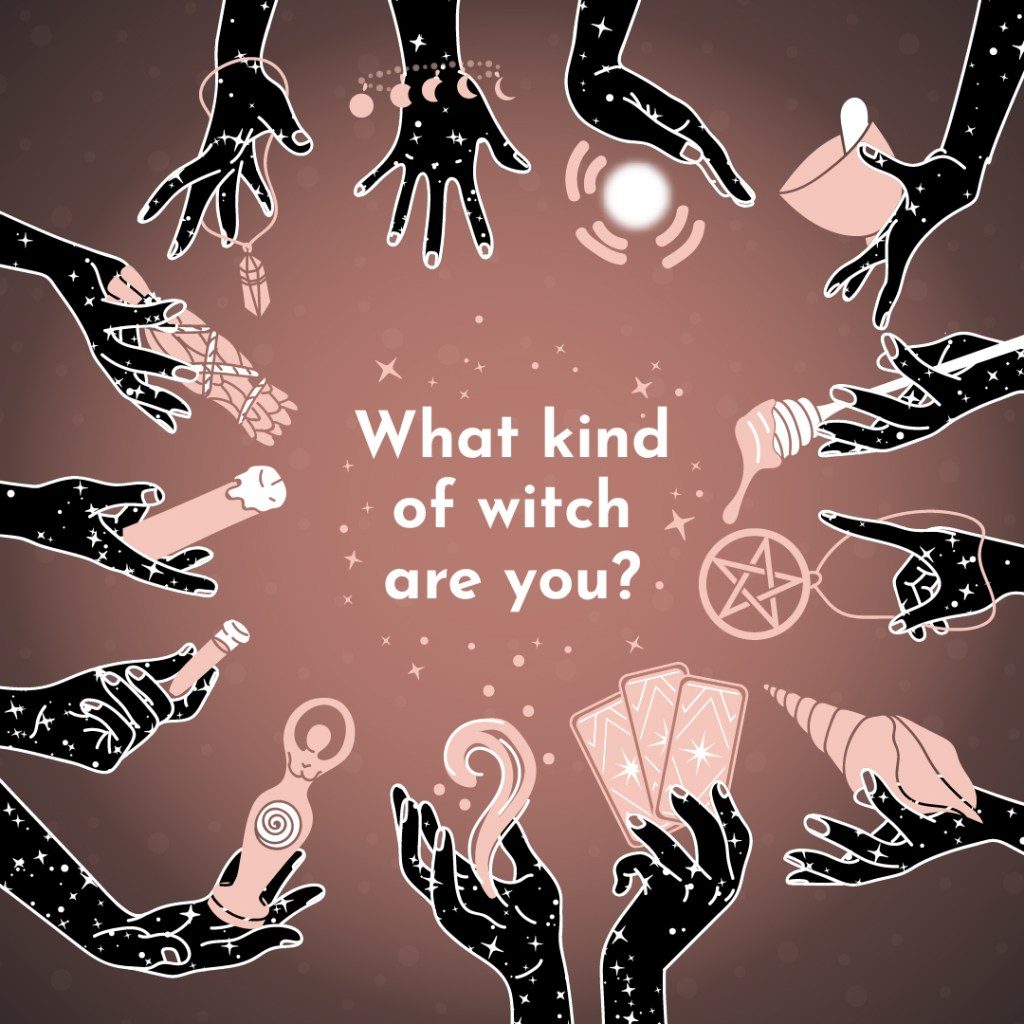 There are many different kinds of witches in the world, each practicing in their own unique way to embody their spirituality and connection with magic. With Halloween right around the corner, we thought wed put together a comprehensive list of 10 types of witches you probably never even knew existed! Below you will find witch spell types and their beliefs/practices, as well as some suggestions on how to incorporate each one into your witchcraft practice if you choose to do so! Happy reading and happy Halloween! I’m just getting started researching the many types of witches, so if you see something inaccurate – comment and let me know!

1) Traditional Witch
What Is a Traditional Witch? A traditional witch is someone who believes that they have innate magical powers and practices witchcraft. They often worship and work with nature spirits, fairies, and ancestral spirits. But witches dont always identify as such; some people call themselves witches by using other terms, such as natural witch, kitchen witch, or green witch. There are no specific or formal requirements to be a traditional witchit’s just a term to describe someone who practices magic.

2) Sea Witch
Although most witches draw their power from a connection to nature, a sea witch harnesses her energy from ocean waves and tides. Her magic is fluid and powerful, allowing her to control water and rain or call upon stormy weather. This makes a sea witch incredibly useful during times of calm, but dangerous in stormy conditions. Despite having no formal training as a witchor as a sailorsea witches have been known to find themselves stranded on remote islands with little food or water.

3) Kitchen Witch
A kitchen witch is a form of witchcraft that involves household activities like cooking, baking, and crafts. The kitchen witch uses her talents to create magical charms using ingredients like sugar, honey, salt, pepper and other common pantry items. Kitchen witches are said to be excellent healers who make healing ointments for aches and pains or to cure minor ailments like colds or eye infections. They also make love potions to enhance relationships with lovers or spouses.

4) Hedge Witch
Hedge witches are people who work with witchcraft, but dont necessarily follow any one tradition. They may combine parts of more than one path or create their own individualized practice. Hedge witches tend to be healers and diviners, but they may also engage in spells and curses. Some hedge witches feel that theres no right or wrong way to use magic; they feel strongly that if something is helpful to them (or not), then its worth doing (or not). Others believe that all witchcraft should be treated with respect and done in a careful, respectful manner so as not to disrupt natural order. They feel witchcraft should only be used for healing purposes or to restore balance in some way.

5) Natural Witch
They dont follow any organized religious doctrine, but natural witches are often inspired by various schools of Paganism. Some people call them nature-witches, which is kind of an umbrella term for anyone who believes in a reverence for nature and all living things. But make no mistake: The word witch is merely a title or description for people who interact with nature in unconventional ways.

6) Elemental Witch
Elemental witches are incredibly in tune with nature. They work with different elements, such as earth, air, fire and water to help heal others. Elemental witchcraft is an umbrella term that includes elemental magic, astrology, tarot cards and herbalism.

7) Ceremonial Witch
Cosmic witches are eclectic witches who worship spirits, elementals and gods; they believe that magic is an innate part of nature and every living thing. They often practice witchcraft to help others or to seek guidance through divination. Although they can choose not to follow any particular tradition, they typically believe in pagan deities like Hecate, Pan and Isis; honor sacred animals like cats and dragons; engage in astrology, tarot cards or other forms of divination; burn incense as an offering to their gods/spirits/ancestors/elementals etc.; have a special connection with nature or are at least strongly interested in it; usually worship more than one deity at a time, which is also called syncretism.

8.) Positive Witch
A positive witch is someone who loves nature and all that comes with it. They take joy in meditation, chanting, candle-burning, yoga and anything else that brings them closer to nature. Many people think witches are crazy or evil but these types of witches are neither. They are loyal, generous individuals who are very open-minded. However they can be cautious around new people because they have been fooled so many times before.

9.) Hereditary Witch
Many times, witches are born into their gift rather than coming to it later in life. Unlike other types of witches, they dont develop their gift due to something traumatic or even because theyve studied hard enough to learn. Some people are just born with a gift that allows them to harness energy and cast spells.

10.) Cosmic Witch
Cosmic witches follow a spiritual path with a reverence for nature and all living creatures. They believe in reincarnation, karma, personal power and positive energy. Traditional witch: Traditional witches follow an ancient tradition passed down from one generation to another. These witches do not follow mainstream religions such as Christianity or Hinduism but instead often align themselves with pagan or earth-based religions.

11.) Secular Witch
Just as a secular humanist is someone who can have a strong moral compass without being religious, a secular witch is just as powerful as other types of witches but doesnt necessarily believe in any specific higher power. These witches typically follow a Wiccan code and abide by a set of guidelines called The Rede. As long as they dont hurt anyone, they can do whatever they want without feeling guilty about it. These witches tend to use magic for good purposes, such as healing and inspiring.

12.) Solitary Witch
A solitary witch is one who practices on her own, whether they live alone or not. They do not follow any one tradition, but instead draw from multiple practices and create their own unique practice. Sometimes called hedge witches, they might practice alone for years before ever coming in contact with other witches. A Solitary Witch has decided to become a witch because she has had an awakening in some form. It often happens when a person goes through a hardship that threatens life or changes their consciousness in some way.

13.) Eclectic Witch
Generally, Wiccans follow a formal set of rules and rituals for themselves and those who wish to take their craft more seriously. Eclectic witches tend to be those who do not take things as seriously, but still practice many different kinds of magic such as spell-casting and potion brewing. As long as it works for them, theyre happy to do it.

What other types of witches would you like to learn about?